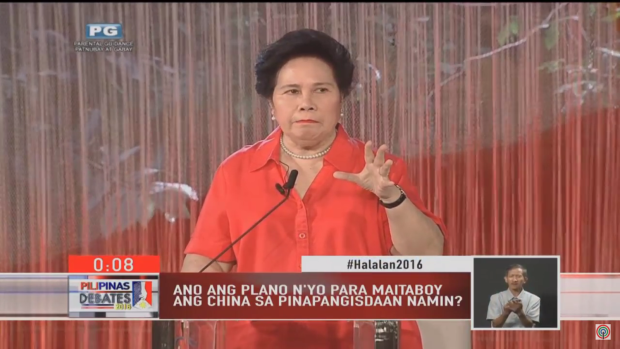 Davao City Mayor Rodrigo Duterte is now the undisputed survey leader in the presidential race, but — behind the scenes at the University of Pangasinan here in Dagupan City, at least, before the start of the last official presidential debate — the loudest welcome was reserved for Sen. Miriam Defensor Santiago.

The ailing senator, fighting a very public battle against cancer, returned to the game-changing debate scene after missing the second leg, in Cebu, and many in the audience seemed genuinely eager to see her after her absence. Many stood up and craned their necks when she entered from the right side of the university gym, and cheers swelled as she made her way to the front. She looked much better, much more in fighting trim, than her appearance at the first debate held in Cagayan de Oro in February.

Santiago, who is making her third run at the presidency, excused herself from the March 20 debate conducted by TV5 and Philippine Star in Cebu City to say she was taking an experimental drug and needed time.

When she answered the first town-hall question, about what the next president can do for Filipino fishermen in the West Philippine Sea being harassed by the Chinese coast guard, by saying one option for her would be to call our coast guard and bomb (“bombahin”) the harassing vehicles, the audience laughed. It was, perhaps, a sign that the feisty senator of old was back.

Read Next
Duterte ready to be ‘feasted’ on in final debate
EDITORS' PICK
Nestlé Philippines’ ‘NESCAFÉ Plan’ bags Grand Anvil at PRSP 56th Anvil Awards
822 NPA-free barangays set to get P20-M gov’t aid — Esperon
Pope Francis to meet top cleric Sistani on second day in Iraq
Don’t waste the hope of vaccines, warns WHO
Every Filipino home can now be a smart home with realme TechLife
Smart reinforces superiority with best speed and mobile video experience in PH
MOST READ
So: I lacked connections to succeed in PH ‘culture’
Robredo on Sara Duterte leading poll surveys: Why are Filipinos drawn to leadership of this kind?
US weapons, hardware in exchange for VFA
US lays out list of aid to ‘satisfy’ Duterte following VFA payment demand
Don't miss out on the latest news and information.