Duterte ready to be ‘feasted’ on in final debate 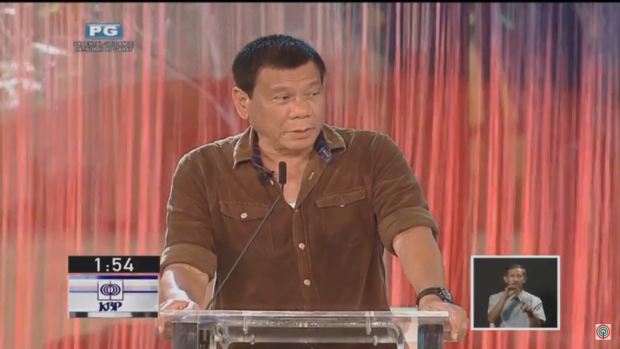 DAGUPAN CITY—Davao City Mayor Rodrigo Duterte on Sunday said he was ready for attacks in the final presidential debate.

“Kung sila ako ang pupulutanin nila, ako gagawin ko silang inuman (If they will feast on me, I will turn them into drink),” Duterte said in an interview upon his arrival at University of Pangasinan, the venue of debate.

Duterte, who led the latest ABS-CBN-Pulse Asia poll, said he did not believe in pre-election surveys because ratings could go up and down.

“I am not into ratings. It can go down anytime … It’s very volatile,” he said.

Duterte was chosen by 34 percent of 4,000 respondents in the survey conducted on April 12 to 17, or before he made a joke about the 1989 rape-slay of Australian missionary Jaqueline Hamill that earned him scathing criticisms.

The mayor’s rating increased by two percent from his rating in the previous ABS-CBN survey conducted on April 5 to 10.

Duterte maintained a 12-point lead ahead of Sen. Grace Poe, who got 22 percent or three points down from the previous survey.

Binay lost one point, ending up with 19 percent rating, while Roxas came at 18 percent, unchanged from the previous survey.

Sen. Miriam Defensor-Santiago was at the bottom with two percent.