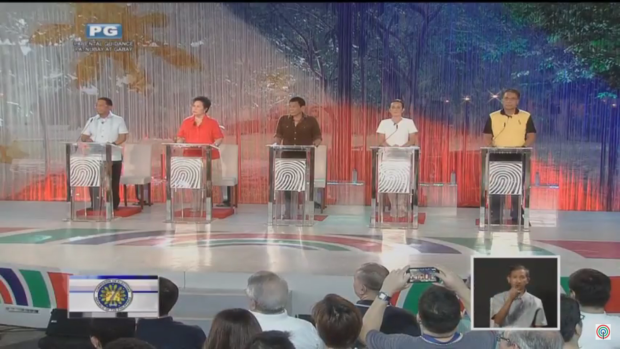 Looking stronger than she did in the Cagayan de Oro leg of the debate series in February, Santiago, who battled stage 4 cancer, didn’t have any problem walking to the stage at the gymnasium of the Phinma University of Pangasinan where the last debate is being held.

Both of them were cheered by their supporters—100 of which were allowed inside the debate hall—in an open gymnasium.

Davao City Mayor Rodrigo Duterte, who was the third one called onstage, shook hands with both Binay and Santiago.

Former interior secretary Mar Roxas also went straight to his assigned spot and shook hands with Poe. However, he also waved at his fellow candidates. Binay, the only one who saw the gesture, waved back.

Binay, who was the former leading presidential candidate, has had verbal spats with both Duterte and Roxas. JE