Poe to the rescue after accusations hurled vs husband, son 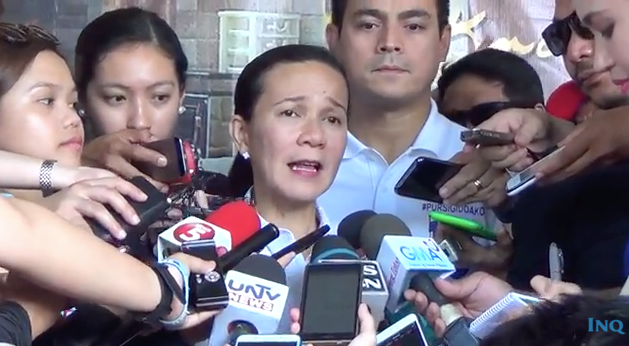 CALACA, Batangas—Presidential candidate Senator Grace Poe dispelled any speculations that she had deliberately omitted or concealed from public that her husband Neil Llamanzares once served in the United States Air Force (USAF).

Poe noted that she had already mentioned about her husband’s stint in USAF even in previous interviews.

(Second, my husband is not running for any government post though I understand that it is necessary that the public should know the background of each candidate’s family members.)

Had she known that her husband’s stint in the US would become an issue, Poe said she would not have mentioned about it in the past.

(Of course, if you would ask me, my husband is a good and kind person who was working decently to provide for our family.)

(Had I known that this would be an issue, I would not have mentioned about it in the past. That is not a confidential document, our fellow countrymen know about it.)

She reiterated that there were many public servants who also studied in US military institutions.

(If you are referring to indoctrination, that’s a grave accusation because even our president had trainings in these military institutions. After all, we consider US as our ally.)

(Of course, I would push for the welfare of our country. If our allies will help us, we would be thankful to them but we would have our foreign policy. And if I will be elected president, I won’t allow that it would be dictated by external forces and I will ensure to prioritize the interest of our fellow countrymen.)

Poe also dismissed the reported filing of a deportation case against her husband and their son Brian who is also a dual citizen.

(Both my husband and son are natural-born [citizens]. Do the critics know more about the law than what is written?)

(They are in a good situation. Let us respect their right to go out of our country.) RAM