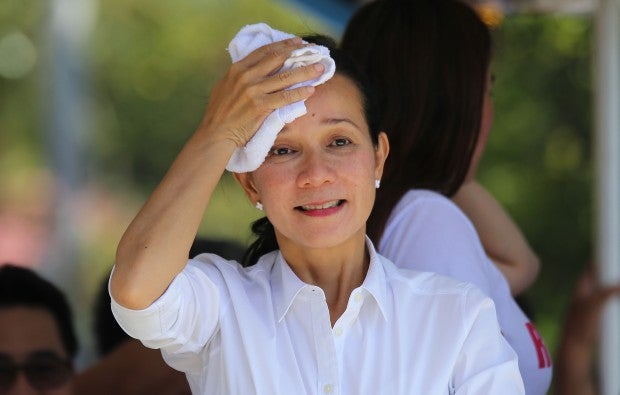 Presidential candidate Grace Poe hit back at her critics Thursday for making a big issue out of her family home in Virginia and her husband’s US Air Force (USAF) background while belittling her experience as a pre-school teacher.

In a break during a rally in Catarman, Northern Samar, Poe said that her house, her husband’s USAF affiliation and her job experience were all “public records,” and that she never hid them from the public.

Poe said she and her husband were not ashamed about owning the Virginia home because “we took a loan for it and we paid it in installment.”

“Other candidates probably inherited those types of houses. Others probably used other means to buy a house like that. But we directly borrowed it and, since we were working, we paid in tranches,” said Poe.

She said the house was sold in 2006 after they decided to return to the Philippines the year before.

Poe said her husband, Neil Llamanzares, was the “breadwinner” with a “decent” job and that she helped him pay off the house with her “meager” salary.

“In America, you have to declare everything that you earn. I hope people don’t put too much malice on it because we never kept it from the public,” said Poe.

“Whoever is claiming that it was a million-dollar mansion, we didn’t buy it at that price,” she said.

Poe said that she and her husband worked as a couple to meet the needs of their family through honorable means, which was the dream of all Filipinos.

Poe said that her husband already had a recruitment business even before he graduated from the George Washington University. “We weren’t in government at that time. Maybe you should ask how a government official could possibly afford owning hundreds of hectares of land,” she said.

Poe said that her husband never concealed the fact he served in the USAF and that it does not change the fact that he is a natural-born Filipino.

She pointed out that some of the country’s leaders studied in US military schools, such as former President Fidel V. Ramos, former lawmaker Roilo Golez and Transportation Secretary Joseph Abaya.

Poe also took exception to critics who denigrate  her experience as  a preschool teacher and sales employee. “They can always call up my former employers. I always believe that experience is nothing [compared] to what a person has proven. Others have long track records, but it is not about length but the quality of service,” said Poe.

“It’s sad that they always bring up my private life where I never did anything wrong. For my husband, you can take Filipinos away from the Philippines but you can’t take away the Philippines from the heart of a Filipino,” said Poe.

“All these issues do not involve plunder or cheating. We have already disclosed these,” she said.