Santiago vows to end PH defense reliance on US 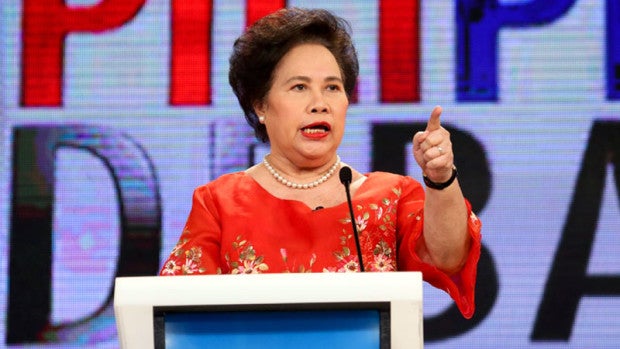 Sen. Miriam Defensor-Santiago vowed to fortify the country’s defense of its territory and put an end to the Philippines’ dependence on the United States for its security.

The Philippines should push for self-reliance in ensuring national security, said Santiago, who is running for president, in a statement Thursday.

“The Philippines will have to once and for all abandon its full-spectrum dependence on America as a guarantor of its national security,” said the senator who has been a critic of the country’s two most recent defense arrangements with the United States—the Visiting Forces Agreement (VFA) and the Enhanced Defense Cooperation Agreement (Edca).

She pointed out that the VFA and the Edca are silent on the extent of US commitment to the Philippines, and imperils the country’s sovereignty and welfare.

Santiago added that it is also unclear whether the Mutual Defense Treaty of 1951 covers the West Philippine Sea disputes.

“Instead of relying on the United States, or acquiescing to China, the Philippines will have to augment its surveillance, reconnaissance and intelligence-gathering capabilities in order to effectively monitor developments in its surrounding waters, preferably at least within its 200-nautical-mile exclusive economic zone,” she said.

If elected president, Santiago vowed to build a refurbished and well-equipped Coast Guard to maintain the country’s territorial integrity through operations against illegal fishing, especially from China and Vietnam.

Santiago pointed out that white-hull coast guard boats, not grey-hulled naval vessels, should primarily be deployed in the West Philippine Sea.

“The moment the Philippines employs naval vessels for law-enforcement operations, as it did during the Scarborough Shoal standoff in 2012, it risks escalation and all-out war,” she explained.

She said that on the issue of territorial integrity, the military should be developed second only to the Coast Guard.

It is crucial for the Armed Forces to adopt a “more outward, maritime-centered security doctrine” instead of focusing on domestic security, she said.

“Obviously, the Philippines or any regional state can never match Chinese defense spending, but we will have to develop minimum deterrence capabilities that allow us to resist and inflict sufficient retaliation if China continues to undermine Philippine territorial integrity,” she said.

Santiago said she intends to strengthen Philippine presence in the disputed areas of the West Philippine Sea by maintaining and augmenting facilities in the Pagasa and Ayungin shoals to protect against Chinese adventurism.

Her government, she stressed, would ensure that relations with China are not defined only by territorial dispute and engage China on key areas of cooperation while working with other Southeast Asian countries in establishing regional unity on the issue of the West Philippine Sea.

“The Philippines must ensure that it adopts, as much as possible, an equi-balancing strategy toward both China and America. To push back against Chinese adventurism by deepening Philippine dependence on another power runs counter to the very logic of protecting its national sovereignty,” Santiago said.