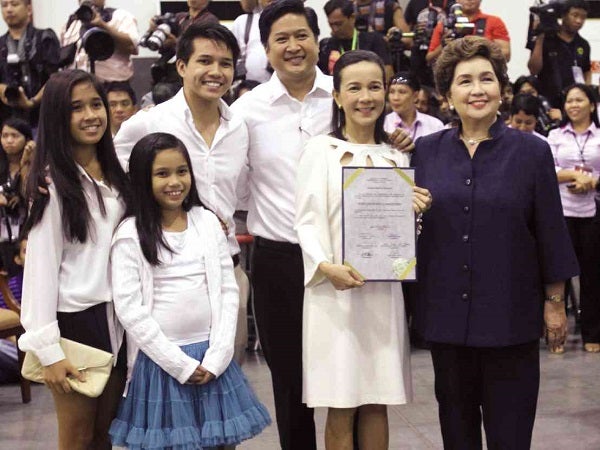 PANGASINAN, Philippines — Senator Grace Poe defended her only son on Friday from criticisms over an alleged expensive shoes that he posted on his Instagram account.

Poe said she asked her son Brian Poe Llamanzares about it when the issue first came out in social media about a month ago.

(I asked him. He showed me how much the shoes were.)

(If you remember, my son was already working. But he had to take a leave because his network had to maintain its objectivity.)

Her son was a neophyte reporter for a television network when he took a leave to help his mother, who is running for president in the May 2016 elections.

Poe said she taught her children to save money but recognized that like any other person, her son would also like to buy some things for himself.

(As long as you worked hard for it and you bought it using your earnings, and you did not steal it or it’s not excessive, then it’s fine. Besides, he was saving for that purchase.)

“Ako hindi sang-ayon dun pero masaya s’ya e ‘di payagan natin (I did not agree with the purchase, but he’s happy so I just let him be),” the senator added.

But as a mother, Poe said she felt bad that her family was being dragged into politics as she expressed hope that they would be spared from it.

(As a mother, personally, I don’t think that it’s right to drag them to politics. Because first and foremost, they are private citizens. Secondly, he did not use public funds to buy the shoes. He saved for that purchase, and I believe he has enough money to purchase those shoes.) IDL