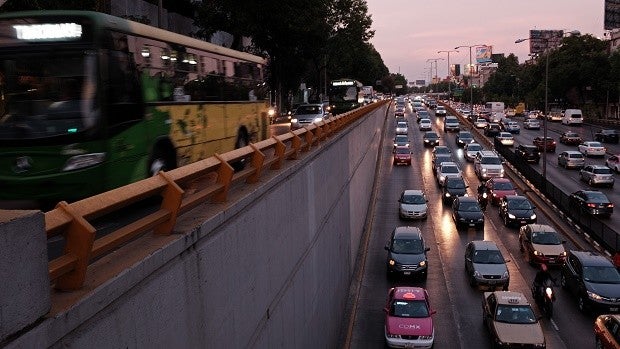 Traffic advances slowly as the day ends in Mexico City, Wednesday, March 30, 2016. Metropolitan authorities temporarily ordered all cars to remain idle one day a week in response to this city’s worst air-quality crisis in over a decade. Until now vehicles have been exempt from Mexico City’s “no circulation” rules if owners obtain a sticker from a smog-check center certifying them as lower-emission. Vehicles will also be forced from the roads one Saturday a month. AP

MEXICO CITY — Metropolitan authorities on Wednesday temporarily ordered all cars to remain idle one day a week in response to this notoriously smoggy capital’s worst air-quality crisis in over a decade.

Until now vehicles have been exempt from Mexico City’s “no circulation” rules if owners obtain a holographic sticker from a smog-check center certifying them as lower-emission.

But the Environmental Commission of the Megalopolis, a cross-government agency comprising the capital and surrounding suburbs that together are home to more than 20 million people, said in a statement that all cars must now comply, even if they have the exemption sticker. Vehicles will also be forced from the roads one Saturday a month.

It also lowered the threshold at which alerts will be declared and predicted that atmospheric conditions will continue to favor the build-up of contaminants during the current dry season.

The measure takes effect Tuesday and runs until June 30, around the time that summer rains typically arrive and improve the region’s air quality significantly.

Officials have been meeting to consider anti-pollution measures since a Phase 1 emergency due to high ozone levels — the first since 2005 — was declared two weeks ago, when warm temperatures and still air left pollution trapped in Mexico City’s volcano-ringed valley.

At the time, government officials and environmental activists pinned at least some of the blame on a Supreme Court decision last year that overturned a rule barring all cars over eight years old from the streets one day a week.

The ruling is said to have put an extra 1.4 million vehicles back on the roads each day.

Smog levels dropped significantly during Easter Week, when much of Mexico City empties out due to the holiday. But on Wednesday afternoon authorities were reporting a pollution index of 108 — officially “bad,” though about half the levels recorded at the peak of the Phase 1 alert.

The commission said that starting July 1, more modern technology will be put in place at smog-check centers. Vehicles are supposed to get checked every six months, though it’s common knowledge that for a bribe of $20 or so drivers can ensure a car comes out “clean.”

“The definitive ‘no circulation’ program will align with the new rule for vehicular verification that will be presented soon,” federal Environment Secretary Rafael Pacchiano tweeted.

Pacchiano said that in addition to Wednesday’s emergency measures, authorities are working on medium-term solutions including improvements to public transportation.