Melting Antarctica alone may lift seas a meter by 2100 — study 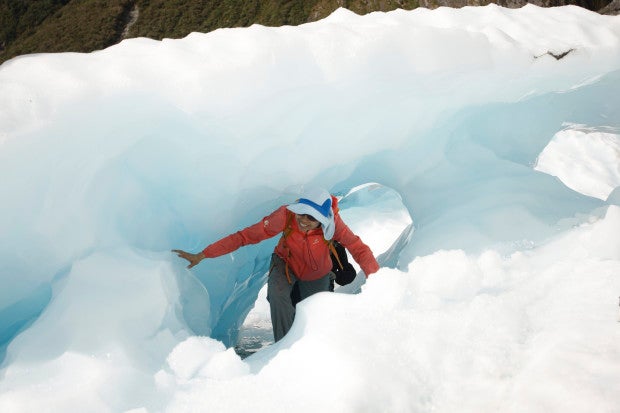 In this Feb. 6, 2016 photo, tourists who have taken a helicopter trip onto the Fox Glacier climb through a hole in the ice in New Zealand. The Fox and Franz Josef glaciers have been melting at such a rapid rate that it has become too dangerous for tourists to hike onto them from the valley floor, ending a tradition that dates back a century. AP

PARIS, France — Melting ice from Antarctica could raise oceans by a meter before 2100 at current rates of greenhouse gas emissions, doubling previous forecasts for sea level rise, according to a study released Wednesday.

Such an abrupt change would spell disaster for major cities and coastal areas across the globe, forcing hundreds of millions of people to seek higher ground.

Over a longer time scale, the study concluded, the picture is even grimmer: within 500 years, Earth’s once-frozen continent will have lifted water lines by more than 15 meters (50 feet), reconfiguring the planet’s coastlines.

“Frankly, I hope we’re wrong about this,” Robert DeConto, lead author of the study and a climate scientist at the University of Massachusetts, told AFP.

But independent experts contacted by AFP said the study was probably on target.

While sharing DeConto’s sense of alarm, they praised the new research, published in the peer-reviewed journal Nature, as “really good science.”

Up to now, estimates of how many centimeters or inches Antarctic melt-off would add to the world’s oceans over the next 85 years have been conservative.

The latest report from the UN Intergovernmental Panel on Climate Change (IPCC), a federation of several thousand scientists that report to governments on global warming and its impacts, put that number at about a dozen centimeters (five inches), all of it from a relatively small section called the West Antarctic Ice Sheet.

The IPCC predicted that total sea level rise from all sources — including the expansion of water as it warms, melting glaciers, and the Greenland ice sheet — would probably not top a meter by century’s end.

But the low figure for Antarctica had more to do with gaps in knowledge than differences of opinion.

Scientists have long struggled, for example, to understand the role Earth’s southern extremity played during earlier periods of global warming — 125,000 and three million years ago — when temperatures barely warmer than our own raised oceans to levels six-to-10 meters higher than today.

“In both cases, the Antarctic ice sheet has been implicated as the primary contributor, hinting at its future vulnerability,” the study said.

But how, exactly, the planet’s ice continent — far colder than the Arctic, and thus less subject to melting — disintegrated remained a mystery.

One is a process called hydrofracturing.

As any teenage can tell you, if you put a sealed bottle of water or beer in a freezer, the liquid will expand and crack the container.

“That’s what happened here,” said Anders Levermann, an expert on the dynamics of ice sheets at the Potsdam Institute in Germany and a lead author of the chapter on sea levels in the most recent IPCC report.

“You have melt water going deep into crevices in the ice sheet, and then it expands and cracks the ice open,” pushing it toward the sea, he told AFP, commenting on the study.

Up to now, scientists have focused mostly on the impact warming oceans have on the overhang from ice sheets, which sit on land.

But it turns out that air temperatures have risen enough to cause some melting on top as well.

The other natural mechanism is the breakup of buttressing ice shelves, and the failure of ice cliffs, that both act as dams for the ice sheets behind them.

“These are not ‘new’ processes’ per se,” DeConto said. “But they haven’t been considered at the continental scale in Antarctica before.”

When the researchers applied their models to the previous periods of warming, the pieces of the puzzle fell into place, he said.

It also gave rise to alarming conclusions about the what lies ahead.

“The fact that a model — tested and calibrated against past examples of sea level rise — simulates such a strong future response to warming if very concerning,” he said.

“This should be a wake up call.”

The study adds to new evidence that ocean water marks may go up more and faster that previously thought, other scientists said.

“The recent modelling now favour the view that continuing rapid warming will cause sea level rise to be larger, and perhaps much larger, especially if we look beyond the end of this century,” said Richard Alley, also a scientist at Pennsylvania State University.

DeConto did note, however, that if humanity succeeds in drastically reducing greenhouse gas emissions in the coming decades, there is relatively little contribution to sea level rise from Antarctica.