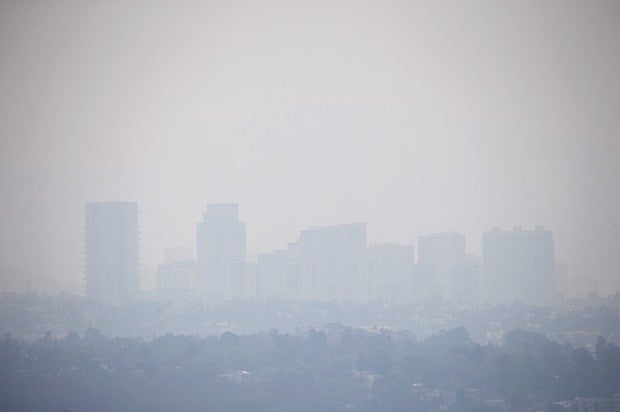 MEXICO CITY — A four-day air pollution emergency alert in Mexico City was lifted Thursday after authorities ordered some cars off the road and atmospheric conditions improved.

Even so, smog on the city’s northern edge reached 1.3 times acceptable limits in the afternoon.

He said that a working group would be established to lower the threshold at which alerts are declared, and find ways to make it easier to detect polluting vehicles.

The state had begun refusing to accept the city’s garbage this week after Mexico City Mayor Miguel Angel Mancera blamed surrounding states for sending pollution into the city.

Mexico State Gov. Eruviel Avila shot back by denying access for the 8,000 tons of garbage the city sends to the state’s dumps each day.

Avila said the garbage released polluting gases and called it “pure poison.” The city government was briefly forced to truck waste to another state further away.

The city and the state have sparred in the past over water issues — the city gets much of its supply from dams in Mexico State — and over garbage and waste water discharges sent from the city to the state.

However, Mexico State inspection centers have a reputation of being more lax in the twice-yearly emissions testing required for cars in the metropolitan area.

The ozone pollution alert declared Monday resulted in a driving ban that kept about 800,000 cars from the roads Wednesday, and a similar number Thursday.

And the hot, dry, windless conditions that helped create the buildup of smog yielded somewhat Thursday.

Among other measures, rules were put in place that aimed to limit the circulation of older, more polluting vehicles, and obliged car owners to get regular smog checks.

But a court relaxed those restrictions last year in a ruling that authorities and environmentalists blame for a rise in traffic. Pacchiano said that decision put an extra 1.4 million cars a day on the streets.

Mancera has complained that cities bordering the capital do not regularly restrict vehicle use even though they contribute greatly to regional pollution. More than 20 million people are estimated to live in greater Mexico City, but only about 9 million in the capital proper.

Ozone is a component of smog that can cause respiratory problems. Mexico City’s last alert for ozone was in 2002, and the last pollution alert for air particles was in 2005.