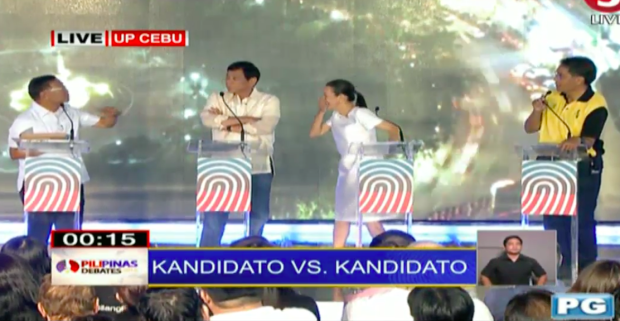 NO ONE was safe during the first half of the second presidential debate held in Cebu on Sunday.

All four presidential bets — Vice President Jejomar Binay, Davao City Mayor Rodrigo Duterte, Senator Grace Poe, and former Interior secretary Manuel “Mar” Roxas II — got their fair share of accusations and name-calling as they were allowed to react to the answers of their fellow candidates.

Corrupt vs not Filipino

“Hindi ka tunay na Filipino! (You are not bona fide Filipino!),” Binay told Poe, more than a week after the Supreme Court sided with her on a disqualification case.

(How can you be a real Filipino when you already pledged your allegiance to America? You are ashamed of your roots.)

Poe defended herself while taking a dig against Binay.

(You remained in this country but you stole money. What is the difference? That is a huge difference.)

(Madame senator, you accuse as if I am already convicted.)

(Were you the thief I was referring to?)

Binay and his family have been accused of getting commission from the alleged overpriced Makati car park building. Poe, on the other hand, has been accused of not being fit to run for president because she was a foundling and a former American citizen. The High Court, however, ruled that Poe should not be disqualified from the presidential race.

Duterte and Roxas exchanged heated arguments over the rising criminality and illegal drugs in the country.

Duterte was asked how he would end criminality and illegal drugs in the country within the first six months if he would be elected president in the upcoming May elections, citing the high crime rate in Davao City in 2010.

(You didn’t do anything. You are claiming credit that is not yours. You are a pretentious leader.)

Roxas and Binay also had their moments. Even before the debate started, Roxas reportedly led the candidates in asserting the Commission on Elections (Comelec) rule against the use of notes during the debate when Binay arrived with folders and envelopes filled with documents and background material.

READ: Roxas, Binay trade barbs on cause of delay in 2nd presidential debate

During the first half of the debate, Binay tried to pin the blame on Roxas when the latter was asked about the slow rehabilitation efforts in areas hit by super typhoon “Yolanda” (international name: Haiyan).

Citing a Commission on Audit report, Binay said Roxas’ former agency, the Department of the Interior and Local Government (DILG), did not liquidate P7 billion in funds.

(Tell your staff to be up-to-date in their research.)

READ: Roxas to Binay: Use current data if you want to discredit me

Read Next
Binay: Enough of mediocrity in gov’t
EDITORS' PICK
Metro Manila to remain under COVID Alert Level 2 until December 15
Legarda: Ending Violence Against Women, a cause for all
A delightful blessing!
Duterte open to making jabs mandatory; Cabinet mulls ‘pressuring’ the unvaccinated
IATF tightens border control, suspends entry of fully vaxxed nationals from ‘green’ countries
Villar Group gears up for AllValue Shopping Party on Dec. 3; around P 1-million promos and discounts up for grabs
MOST READ
Quiboloy warns of ‘much worse than Omicron virus’ if his ‘persecution’ is not stopped
Bongbong Marcos’ conviction in tax case not a crime involving moral turpitude — lawyer
Marcoleta defends pol ads on ABS-CBN
IATF tightens border control, suspends entry of fully vaxxed travelers from ‘green’ countries
Don't miss out on the latest news and information.