Roxas to Binay: Use current data if you want to discredit me | Inquirer News
Close
menu
search

Roxas to Binay: Use current data if you want to discredit me 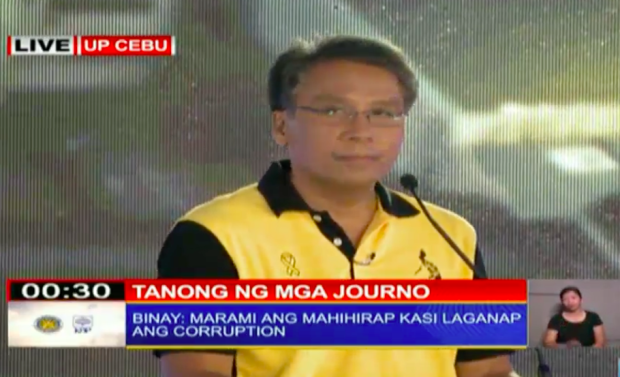 Interior Secretary Mar Roxas answers questions on corruption during the second presidential debate in UP Cebu. SCREENGRAB FROM TV5

Former Interior secretary Manuel “Mar” Roxas II on Sunday was in fighting form as he deflected the accusations of his fellow presidential candidates during the second presidential debate at the University of the Philippines Cebu campus.

Roxas hit back at Vice President Jejomar Binay and Davao City Mayor Rodrigo Duterte when asked about the current administration’s inability to provide for the needs of Supertyphoon “Yolanda” (international name: Haiyan) survivors.

(If you want to discredit me or throw mud at me, at least use current data.)

Binay was asking him why his former agency, the Department of Interior and Local Government (DILG), did not liquidate P7 billion in funds, according to the Commission on Audit (COA).

Roxas explained that of course at that time, when the 2014 report was released, the funds have yet to be liquidated.

(Tell you staff to be up to date in their research.)

Roxas claimed that of the P90 billion released for the rehabilitation of areas hit by Yolanda, P4 billion was allocated to the DILG.

He said everything was sent to the local government units to fix and construct infrastructure.

(Now, more than 93 percent of those projects have been completed.)

However, Roxas admitted that there are still survivors who have yet to benefit from the government’s housing program.

He said another P46 billion will be released, with P30 billion going to the National Housing Authority.

(We are doing everything. More than 10 million food packs have been distributed. This is a lengthy process, but the government is doing its job.)

Duterte also used COA reports to ask Roxas about 37 percent of the Yolanda funds that have yet to be spent on rehabilitation projects.

Roxas pointed out that the DILG has finished 90 percent of its Yolanda-related projects. He said those that have not been implemented were probably under the other agencies.

Duterte later apologized and said he was referring to all the agencies involved.

Senator Grace Poe, on the other hand, said what was needed was good communication, especially since there are still a lot to be done for the rehabilitation of affected provinces.

“’Pag kukuha tayo ng isang leader. Isang leader na may management style (If we will elect a leader, it should be one with a management style),” she said, in an apparent dig at Roxas, who has been criticized by his rivals for his way of leadership. IDL