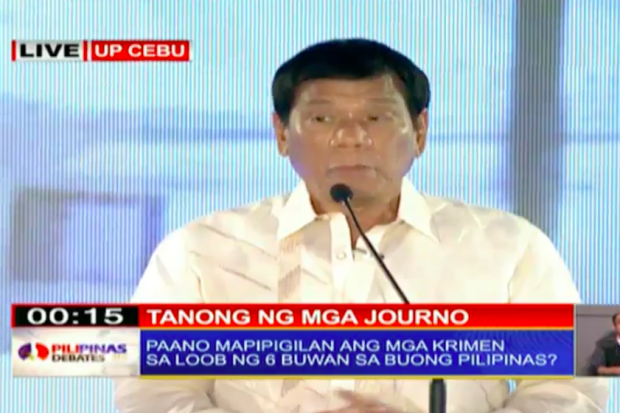 Duterte and Roxas got in a heated exchange over the rising criminality and illegal drugs in the country.

Duterte was asked how he would end criminality and illegal drugs in the country within the first six months if he would be elected president in the upcoming May elections, citing the high criminality rate in Davao City in 2010.

“I will do it, just like what I did to Davao,” the tough-talking mayor said.

The mayor explained that the high crime rate in Davao includes anti-smoking and urinating violations and not just about high-profile criminals.

Roxas earlier said that Duterte’s claim that Davao City is safe was a “myth.”

Duterte then hit back at Roxas, saying the latter as the former Interior secretary had control over the Philippine National Police (PNP).

“We do not exercise control over the police,” Duterte told Roxas.

“Si Mar walang alam sa (Mar does not know anything about) local government,” he said.

But Roxas cited his accomplishment as an Interior secretary, citing the police have arrested drug syndicates and criminals during his stint as a cabinet secretary.

“Yes, inaresto mo pero anong ginawa ninyo (Yes, you had them arrested, but what else did you do)?” Duterte asked.

“You are claiming credit that is not yours. You are a pretentious leader,” he said.

But Roxas hit back at the mayor’s comments.

(The truth is, they have been arrested and the fight against drugs continues. That is not being pretentious. It is a reality; it has been reported.)

But Duterte continued hitting Roxas for his remarks.

“This administration allowed shabu to be cooked inside prison. Is that performance?” he said. “Wala talaga ‘yang alam (you really don’t know anything),” he added.

(That is Duterte’s brand of justice—whatever is ingrained in his mind, even if it’s not true, it is what he’ll believe in.)

Duterte then brought up the question on Roxas’ Wharton education.

“You’re a fraud, you’re pretentious. Pati edukasyon sinali mo ‘yung Wharton hindi ka naman taga- Wharton (You claimed to have studied from Wharton even if you did not),” he said.

But Roxas asserted he was a Wharton graduate.