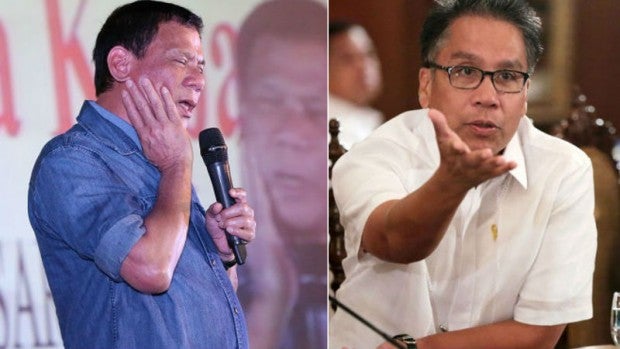 The camp of presidential bet Rodrigo Duterte slammed Liberal Party’s standard-bearer Manuel “Mar” Roxas II after claiming he knows where to buy illegal drugs in Davao City, where the former is the incumbent mayor.

Peter Laviña, spokesman of the Duterte team, described Roxas’ statements as “pathetic,” adding that the administration bet is showing he is not fit to be the next president of the county.

“He did not only exhibit irresponsible citizenship by not reporting to authorities where drugs are being peddled, he has, in fact, become an accomplice in protecting drug lords and drug pushers,” Laviña said in a statement on Tuesday.

Speaking to reporters after the presidential debate in Cagayan de Oro City on Sunday, Roxas claimed that there are prohibited drugs in Davao City, taking a swipe at Duterte’s campaign against anti-illegal drugs.

(So his (Duterte’s) campaign against anti-illegal drugs is not effective. If he supposedly can do it, why isn’t is happening just yet?)

In various public speeches and interviews, Duterte has vowed to stop criminality and illegal drugs within the first six months in office if he is elected president.

However, Roxas said the crime rate in Davao City is the fourth highest in the country.

With his pronouncements, Laviña said Roxas was trying to tarnish the reputation of Duterte and Davao City alike.

“He is painting others black so he will look white,” he said, adding that Roxas should go to jail and not in Malacanang.

Furthermore, Laviña hit back at Roxas, asking what has he done as a former interior secretary.

Roxas served as the interior secretary under the administration of President Benigno Aquino III before resigning from his post to run for president.

“What has he done as Secretary of DILG (Department of the Interior and Local Government) and as chairman of the National Police Commission to fight drug abuse?” Laviña asked.

Duterte has said that as the interior secretary, Roxas had the administrative power over the police. RAM