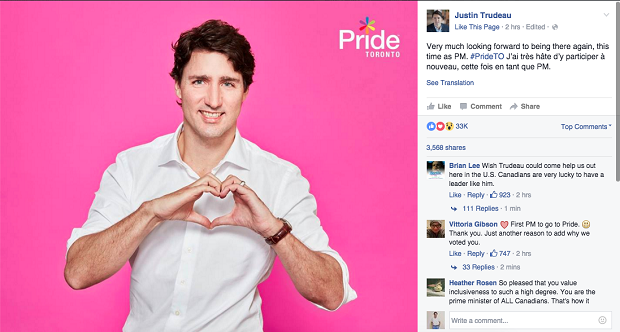 Canadaian Prime Minister Justin Trudeau on Tuesday announced that he will be joining the pride parade in Toronto, the first Canadian leader to do so in the nation’s history.

In a photo posted on his social media accounts, a smiling Trudeau can be seen forming a heart with his hands.

“Very much looking forward to being there again, this time as PM. #‎PrideTO,” his caption read.

The parade will take place on July 3.

Organizers of the event said that aside from Trudeau, other Canadian officials such as Finance Minister Bill Morneau, Ontario Premier Kathleen Wynne and Toronto Mayor John Tory are also slated to participate in the activity.

Gay Syrian refugees are also expected to join in the activities for Toronto’s Pride month.

Trudeau, who captured the hearts of Filipinos last year for being a “hottie” during the Apec Summit, has regularly participated in Pride parades in Montreal, Toronto and Vancouver while he was still a premier and leader of the Liberal Party.

READ: Trudeau to Filipinos: Judge me beyond my looks

He is also a vocal advocate for lesbian, gay, bisexual and transgender (LGBT) rights.

Last year, netizens lauded him for posing with an openly gay member of the Canadian parliament, his partner, and their daughters. AJH/CDG