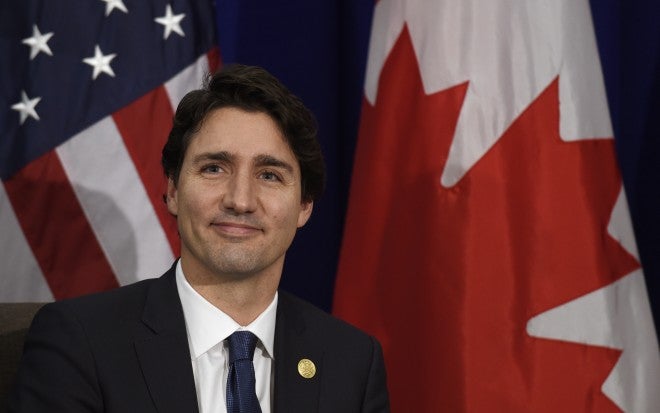 The morning after winning October 19 legislative elections, the Liberal leader cast aside his bodyguards to greet commuters at a subway stop in Montreal, and thank the people in his blue-collar electoral district for their support.

“The Trudeau brand is all about being up close and personal,” said Thierry Giasson, political communication specialist at Laval University in Quebec.

“His taking of selfies with voters throughout the election campaign is a perfect embodiment of this approach.”

From his swearing-in that was open to the public to international meetings in Davos or Manila, where he received a rock-star welcome and was tagged as a “hottie” politician on social media, to a televised one-on-one chat with 10 average Canadians, Trudeau has carefully cultivated his image.

READ: Trudeau to Filipinos: Judge me beyond my looks

His omnipresent smile, however, has sometimes left observers wondering about his sincerity and compassion in moments of tragedy.

“He is trying to leverage his skills. Remember, he studied drama, he was something of a performer, he performed well in the debates.”

Pierre Trudeau has often been described as the father of modern Canada.

“Staging glimpses of their private lives for the public was quite frequent,” Giasson said of Justin Trudeau’s family.

“His own comfortable relationship with the public stems from those early experiences.”

Trudeau spent five years getting his feet wet as a backbench member of parliament in opposition before winning the leadership of the party in 2013 and then in two and a half short years becoming prime minister. At 44, however, he is still considered a rookie politician.

A focus on the Trudeau name during the campaign arguably gave him an edge over lesser known rivals at the polls. Many Canadians felt they knew him, having watched him grow up in the public eye during his father’s time in office.

A glamorous photo spread in Vogue in December depicting him and his wife Sophie canoodling affirmed his celebrity.

“There’s something attractive about this man, of a young father with a pretty wife and beautiful children, all very healthy and happy. It’s an image that Canadians want to see,” said Giasson.

He represents the next generation taking the reins, one that is comfortable with social media and splashing his life on Facebook and Twitter for the world to see.

Notably, this included photos of Trudeau and his wife dressed in Star Wars costumes taking their children trick or treating on Halloween.

In tune with his generation, Trudeau has led an activist government that he said “looks like Canada,” referring to the ethnic diversity and gender parity in his cabinet.

Asked why this was important, he replied simply: “Because it’s 2015!”

Sometimes dismissed as simplistic, the comment “sends a strong message,” said Jean-Jacques Streliski of HEC Montreal, adding that it heralds a “complete break” with the autocratic governing style of his predecessor, former prime minister Stephen Harper.

“He who invests the most in their image will benefit as long as possible… and Trudeau has done that to the maximum possible extent,” he said.

It has also opened up the prime minister to criticism from opposition benches that he is more style than substance at a time when falling oil prices have devastated the Canadian oil sector and unemployment is on the rise.

Tory opposition leader Rona Ambrose accused Trudeau of “swanning around Switzerland with actors and billionaires” including Bono and actor Kevin Spacey, and “hanging out with the one percent” at the World Economic Forum while ignoring Canadian economic issues.

“Maybe the prime minister should stop using his cell phone for selfies with Leo DiCaprio” and focus on economic matters such as pipelines, she said in parliament.

“The risk is that Trudeau continues to roll out staged family photos and the like, in an attempt to mask his lack of governing,” warned Giasson.

“That’s where public opinion could turn on him.” TVJ