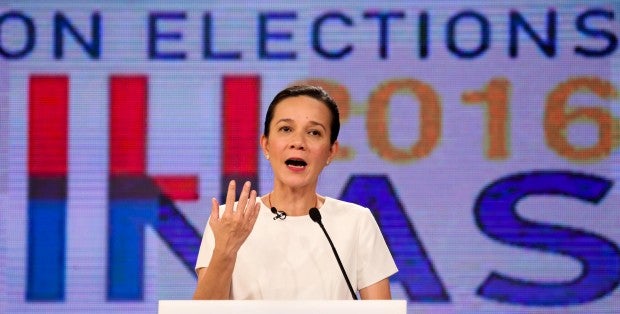 The Commission on Elections (Comelec) has shown its “clear bias and partiality” against Senator Grace Poe based on abuses it has conducted leading to the cancellation of her certificate of candidacy (COC), her camp told the Supreme Court (SC).

In her 331-page memoranda submitted to the high court, Poe, through her legal team led by Atty. Alexander J. Poblador said their petition to reverse the Comelec’s decisions should be granted to correct the “patent violations of the Constitution or laws and settled jurisprudence on matters raised before the Comelec.”

Poblador said that for one, Comelec refused to consolidate the disqualification cases against Poe filed by Atty. Estrella Elamparo and the case filed by former Senator Francisco “Kit” Tatad, former University of the East Law Dean Amado Valdez and Political Science Professor Antonio Contreras when both cases involved the same sets of facts.

Poe’s lawyers added that Comelec also insisted “on an impossible burden of certainty in the process of requiring petitioner (Poe) evidence [which is] obviously not available.”

Comelec, during the oral arguments insisted that Poe could prove that she is a natural-born citizen through DNA test.

However, even Supreme Court Justices noted its unlikeliness because Poe was abandoned by her parents.

They reiterated also the question on the release of the twin Comelec rulings which was two days before Christmas thus Poe’s camp had to wait before the holidays to appeal. Plus they took note of the “out of court speeches” of some of the Commissioners indicating their “inexplicably antagonistic attitude” against Poe.

They lamented how the Comelec “changed and manipulated at every turn” the rules of the game in deciding Poe’s case “to achieve the singular objective of denying due course to her COC, and ultimately, removing her name from the official ballot.”

The Comelec, they said, denied Poe of her right to due process when it disregarded the overwhelming evidence proving that although a foundling, she is a natural-born citizen and that she has been a resident of the Philippines since May 24, 2005.

“Fueled, as they were, by arbitrariness and, at times, by apparent hostility, the Commission’s acts constitute grave abuse of discretion which, Sen. Poe humbly submits, are correctible by the extraordinary writ of certiorari which only this Honorable Court can issue,” the lawyers said.

On the issue of citizenship, Poe’s lawyers said the Comelec abused its discretion when it ruled that the lady senator had the burden of proving her natural-born citizenship.

Poe’s legal counsel said that even as a foundling, she is a natural-born Filipino citizen based on the generally acceptable principle of international law, which presumes foundlings to be natural-born citizens of the country where they were found.

“As importantly, the burden to prove that petitioner is not a natural-born Filipino citizen rested on the private respondents, because petitioner is presumed by law to be qualified for the office for which she now seeks to run,” they explained.

The Comelec, Poe’s camp said disregarded the majority opinion in the Tecson case, that ruled in favor of her father, Fernando Poe Jr.’s qualification to run for the 2004 Presidential polls. In the said case, the high court ruled that the burden of proving that Ronald Allan Kelley Poe is not natural-born citizen is upon those making the accusations.

However, Poe’s lawyers said Comelec instead opted to follow the dissenting opinion of Senior Associate Justice Antonio Carpio who said that the burden of proof should be upon the one claiming his or her citizenship.

“With the realization that the Comelec First Division had relied on a dissenting opinion in Tecson, shouldn’t the first order of business for the Comelec en banc have been to apply instead the majority decision in the same case,” Poe’s camp said.

Also contrary to Comelec’s claim, Poe’s lawyers said the senator did not commit material misrepresentation when she indicated in her COC that she was a natural-born Filipino citizen and that she will be a resident of the Philippines for “10 years and 11 months” by May 9, which is beyond the 10-year residency requirement for presidential candidates prescribed in the 1987 Constitution.

On the residency issue, the lawyers said the Comelec “acted whimsically and capriciously, ignored settled jurisprudence and disregarded the evidence on record” when it ruled that Poe made a false material representation as to the period of her residence before the May 9 polls.

“The Comelec had the positive duty to consider and weigh Sen. Poe’s evidence showing that she had reestablished her domicile of choice in the Philippines as early as 24 May 2005,” Poe’s legal team said.

“The Comelec’s refusal to perform this positive duty, and its gross inexcusable misappreciation of Sen. Poe’s evidence, are questionably acts of grave abuse of discretion amounting to lack or excess of jurisdiction, which warrant setting aside the Comelec’s finding of fact on the issue of Sen. Poe’s residence,” it added.

The lawyers also maintained that Poe “acted in good faith” as to the entry in her COC regarding her residency and that there was no “deliberate intent” on her part to mislead the electorate.

Based on records, Poe began to settle permanently in the Philippines on May 24, 2005. After that, she enrolled her children to local schools in June 2005, purchased a property in the late 2005, constructed her family home in Quezon City in early 2006, and sold their U.S. property in 2006. IDL