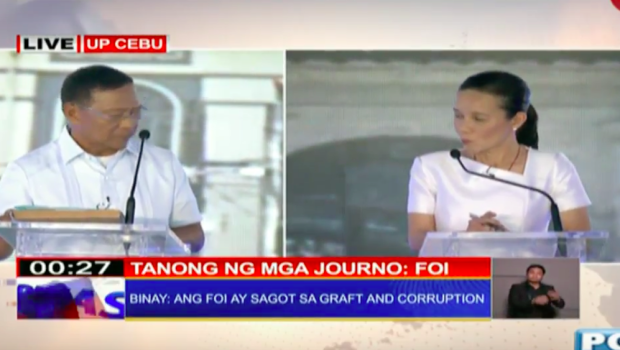 This escalated when Binay accused Poe of once renouncing her Philippine citizenship because she was ashamed; Poe shot back and alleged the Vice President of being a corrupt official.

The verbal tussle was ignited when Binay was giving his statement about supporting the freedom of information that he would implement in an executive order.

Poe interjected saying she can’t believe that Binay supported the freedom of information measure when he does not even want to answer the corruption allegations hurled against him during the Senate investigation.

Binay said the allegations are not convictions until the court issues a decision finding him liable for the corruption.

“Kung ano ang desisyon, sundin natin. We must be a government with a rule of law,” Binay added.

Poe rebutted and said the same rule of law dictates that Binay should also follow the rules of the debate.

The debate was delayed after Binay’s political nemesis Mar Roxas opposed the move of the Vice President to bring documents during the debates.

Binay took this opportunity to lash back at Poe over the questions surrounding her citizenship.

Poe once renounced her Filipino citizenship to become an American citizen before reacquiring it to serve in the Philippine government.

Poe defended that the law also respects the rights of overseas Filipinos.

Poe lashed back at Binay as he was the one violating the rule of law by  pocketing millions of kickbacks when he was Makati mayor.

Binay blasted Poe for portraying him as if he were already convicted for the crime.