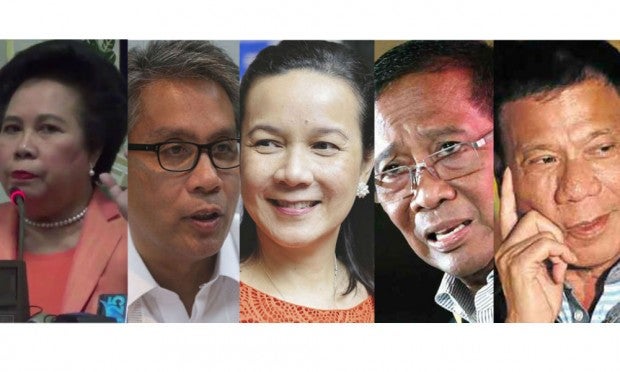 Increasing the salaries of workers and combating illegal drugs are the top issues Filipino voters want their preferred presidential candidate to address once he or she wins the presidency, the latest Pulse Asia survey revealed.

The survey, conducted from January 24 to 28, showed that among the 1,800 respondents, 38 percent of registered voters want immediate action on increasing workers’ pay while 36 percent want their presidential candidate to address the issue on illegal drugs.

READ: Agenda of the next president: Economy and jobs

The “Pulso ng Bayan” survey asked the respondents—all registered Filipino voters—to choose the top three from predetermined issues they want their presidential bets to address once elected into office.

(Of the following national issues, indicate the three issues do you think your preferred candidate should prioritize once he is elected president. Which should come first, second or third?)

Other concerns chosen by the respondents include controlling inflation (30%), fighting corruption in government (30%), reducing poverty (29%), and creating more jobs (26%).

Other issues included in the choices were fighting criminality (24%); enforcing the rule of law (20%); promoting peace (12%); curbing the spread of illegal gambling (11%); protecting the environment (10%); defending national territorial integrity (8%); and preparing for disasters and calamities (8%).

The survey showed that the least cited national concern were protecting the welfare of overseas Filipino workers (7%), responding quickly to the needs of those affected by calamities (6%), and preparing to successfully deal with terrorism (4%).”

The survey has a margin of error of plus or minus two percent. IDL

Agenda of the next President: Corruption

Agenda of the next president: Food security

Agenda of the next President: Healthcare

Agenda of the next president: Peace and order

Agenda of the next president: Poverty reduction