Agenda of the next president: Peace and order | Inquirer News
Close
menu
search

Agenda of the next president: Peace and order

Starting Feb. 9, 2016, the Inquirer is coming out with a 10-part series on pressing national concerns that should be high on the agenda of the five contenders in the May 9 presidential election. The series should help  Filipinos choose wisely the country’s next leader. 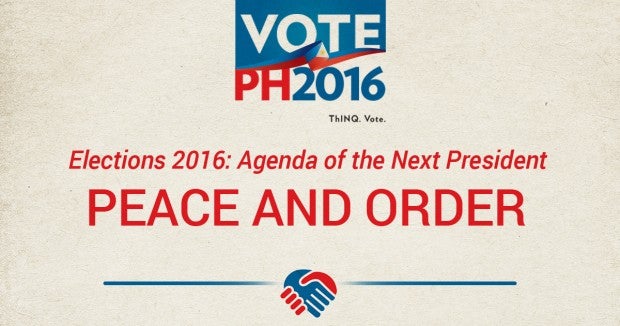 The failure of the Aquino administration to pass the proposed Bangsamoro Basic Law leaves the search for lasting peace in Mindanao to the next administration. The new government will also have to contend with other armed groups in Mindanao and communist rebels to achieve peace. For safe communities, the new administration will likewise have to deal with criminality, including extrajudicial killings, and ensure swift delivery of justice.

INQUIRER.net is publishing verbatim the candidates’ action plans to address food security in the Philippines. For the summary of the 10 pressing issues, go to our special Elections 2016 website.

The Binay administration will ensure that every Filipino home and community is safe and secure.

Combating the threats to peace and security entails a comprehensive and strategic framework aimed at sustainable and long-term solutions.

With regard to the increasing crime rate, efforts must be made to strengthen law enforcement institutions to cope with the difficult task of crime prevention. A crime czar will be appointed in the person of Sen. Gringo Honasan. There must be a collective effort among agencies of the government, including the Philippine National Police, Armed Forces of the Philippines, National Bureau of Investigation, Department of the Interior and Local Government, and Department of Justice. The modernization of the PNP and AFP should be implemented. Also, there must be a strong and independent judicial system throughout the country to achieve a holistic and effective approach to resolving violence and crimes. The rule of law must be upheld at all times.

With regard to the ongoing peace process, we will pursue peace negotiations that will lead to a meaningful and final resolution of the armed conflict, which persists in some areas. We will work to address the root causes of the armed conflict: poverty, inequality and injustice.

Under a Binay presidency, there will be a multisector dialogue that respects the noble objectives of the Bangsamoro Basic Law agreement while ensuring transparency and openness to all constructive ideas toward a lasting and fair resolution of this centuries-old problem. It is important that effective legislation, consistent with the Constitution and promotes and protects the rights of the Bangsamoro people, would be crafted.

We will standardize the implementation of a smart policing strategy called Oplan Lambat-Sibat throughout the country to make sure that all communities enjoy life free from fear and instability.

Oplan Lambat-Sibat is a deliberate, programmatic and sustained approach in fighting crime that was piloted in the National Capital Region in June 2014, leading to a 70-percent reduction in the incidence of crime. From catching small-time criminals via wide dragnet operations (“lambat” or net), to apprehending organized crime leaders via intel-targeted operations (“sibat” or spear), all security measures are based on data that is regularly audited. To give the PNP the best chance of success in all their missions, we will also provide them with sufficient training and equipment.

Aside from all the statistics, it is important to know that crime is very personal for the victim. Showing the people that crime does not pay builds trust between the government and the other stakeholders, making for an environment that will ensure that communities are safe from all threats, big or small.

Though the chances are faint for the Bangsamoro Basic Law to be passed in this Congress, we will continue to give Mindanao a chance to have long-lasting peace. There is a saying: Without peace, there can be no prosperity; without prosperity, there can be no peace. Mindanao needs massive investments in infrastructure to spur development that can lead to prosperity. Government services such as education and health care should reach the people, especially in the less-developed areas in the island.

As such, we are hoping that our legislators will be enlightened about the Bangsamoro Basic Law. We also continue to invite all Filipinos to engage in the discourse and take part in the consensus-building process. If it doesn’t get passed, we will push for it. But before refiling it as a new bill, we will conduct consultations with all relevant stakeholders.

But this law is just an instrument. Through the years, what we have all wanted was peace. We have tried many solutions before which only led to conflict and instability because the level of trust was not high enough to urge all stakeholders to commit to a mutually desired outcome. That is why our good governance foundation is very important: When everything else fails, we can only be as good as the commitments we have made.