Comelec to hold tests in 20 areas 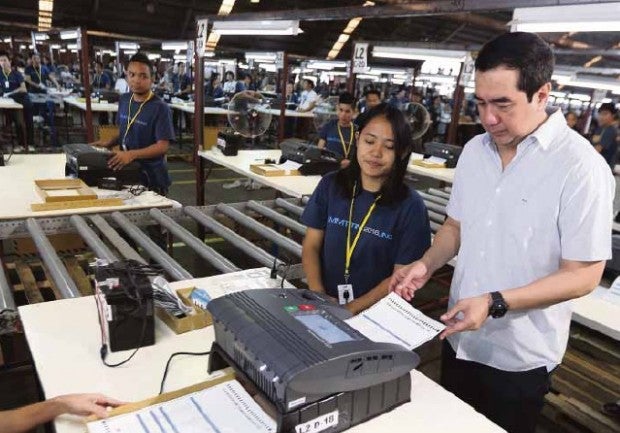 Amid fears among presidential candidates of potential glitches, mock elections are being conducted on Saturday in 20 key locations across the country to test the voting system that the Commission on Elections (Comelec) is using in the May 9 balloting.

In a statement, the Comelec said it expected more than 25,000 voters to join the exercise which would test and ensure the adequate security, accuracy, system and functional capability and integrity of the vote-counting machines (VCMs), transmission devices, consolidation and canvassing system.

The Comelec said the event would simulate the conduct of election (deployment, voting and consolidation) and transmission procedures, and enhance public confidence and acceptance of the Automated Election System (AES).

Among other issues, about 1 to 2 percent of ballots were rejected by vote-counting machines (VCMs) during a ballot verification test earlier this week, according to Mike Santos of international certifier SLI Global Solutions.

With over 50 million ballots scheduled to be printed for the May polls, the rejection rate would translate to between 500,000 to 1 million ballots that may be rejected by the VCMs.

The mock elections will be held in the following areas:

In a letter to the Comelec, George Garcia, counsel of presidential candidate Sen. Grace Poe, requested that a comprehensive written report on the result of testing of the VCMs be issued by its technical evaluation committee as soon as possible.

Garcia made the request following “several negative reports regarding the result of the initial testing of the VCMs.”

“Unfortunately, the result of such testing are hounded by undesirable feedback, such as … failure of the VCMs to recognize the paper ballots, failure of the VCMs to count the votes, and the fact that the report of SLI Global Solutions, which was tasked to conduct the required review and certification of the source code, is unavailable for inspection,” he said.

Garcia said the appeal “is interposed purposely to dispel said negative reports and to affirm that the Comelec is doing its best to ensure that the forthcoming election will be free from technological glitches and other similar irregularities.”

In a statement, UNA spokesperson Mon Ilagan said: “It seems that someone is already laying the predicate and some do allow these problems to surface to give them enough window to manipulate the elections … We hope that these issues and concerns being raised in relation to the delays and glitches will not be used as reasons to allow the Comelec to invoke their power to suspend the polls or force them to go back to manual voting.”

Section 5 of the Omnibus Election Code allows the Comelec to suspend the elections, Ilagan said, “in case of violence, terrorism, force majeure and other analogue causes” that may cause  a failure to elect officials.

In a phone interview with reporters, Sen. Aquilino Pimentel III, PDP-Laban president, said Tuesday’s hearing of the joint congressional oversight committee of the Automated Election System would allow the party to “officially and formally ask the Comelec what is really happening.”

“We have to revisit their own timetable which they submitted way back in August 2015 and I am also asking an updated timetable. We will compare the two (timetables) so we could see how delayed they are,” Pimentel said.

He said he was “worried and disappointed” over the Comelec’s latest pronouncements of delays in the preparations.

Under the law, Comelec should have already “certified the system was already OK” before the 90-day campaign season, Pimentel said.

If the elections will not push through in May, Pimentel said, the “present crop of commissioners will go down in history as the most incompetent.”