Agenda of the next president: Poverty reduction

Starting Feb. 9, 2016, the Inquirer is coming out with a 10-part series on pressing national concerns that should be high on the agenda of the five contenders in the May 9 presidential election. The series should help Filipinos choose wisely the country’s next leader.

In line with the Inquirer’s “ThINQ.Vote.” advocacy, we have asked the presidential candidates to outline their concrete plans of action in dealing with 10 decades-long issues on poverty, economy and jobs, food security, peace and order, corruption, health care, foreign policy, traffic, climate change and Internet connectivity. 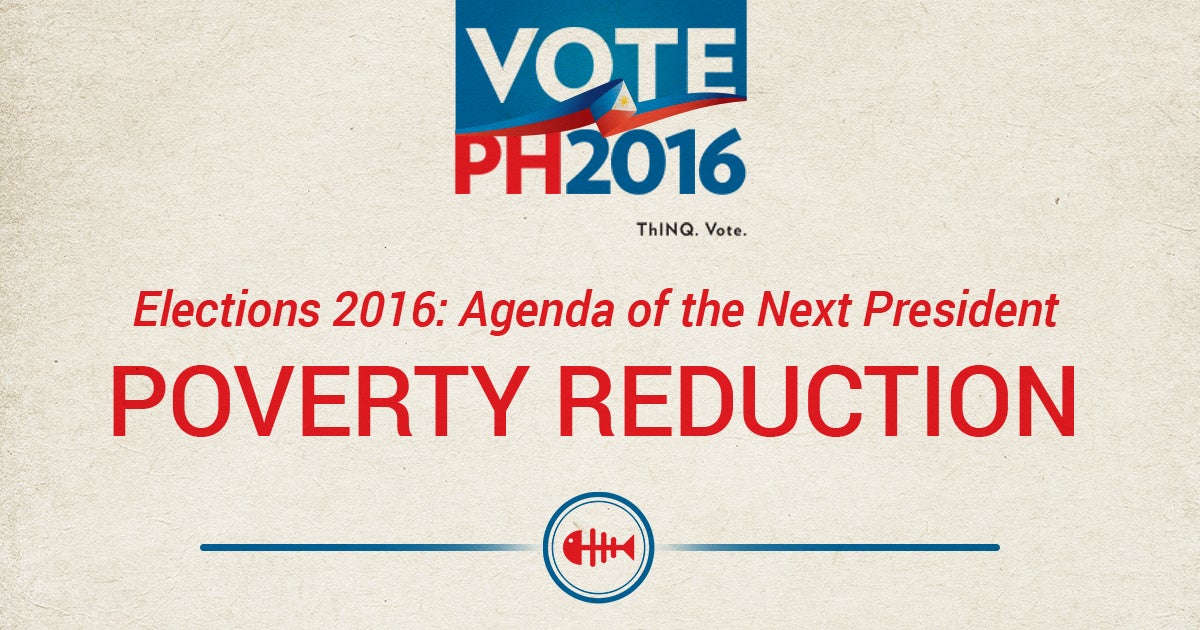 Poverty is the biggest problem in the Philippines. A recent Social Weather Stations survey showed that one in every two Filipino families rated themselves poor in 2015. A Pulse Asia survey also found that 38 percent of the respondents viewed poverty as one of the most urgent national concerns. Studies have shown that among the causes of poverty are inequality, poor government, corruption and slow economic growth.

INQUIRER.net is publishing verbatim the candidates’ action plans. For the summary of the 10 pressing issues, go to our special Election 2016 website.

A Binay presidency will address poverty by creating jobs in key sectors.

We shall focus on the proper implementation and monitoring of government projects and programs. This, in turn, will help attract more capital, generate more jobs and provide additional revenues to enable the state to take better care of our poor and marginalized countrymen.

We shall raise agricultural productivity by reengineering the Comprehensive Agrarian Reform Program (CARP) into a well-guided agri-agra development program, and push for amending the CARP Law to allow beneficiaries to sell their usufruct rights and promote corporate farming.

We will make the manufacturing and export sectors more competitive by improving infrastructure and technology logistics that will lower the cost of production, ensure affordable and reliable power supply, and streamline the bureaucratic process of starting a business in the Philippines.

We will accelerate infrastructure development to boost tourism and address traffic congestion. The Philippines has plenty of tourism gems that are not as accessible due to our poor network of roads, public transport, bridges, ports and airports.

We will open up the economy further to foreign investments. We believe that our economic restrictions adversely affect the Philippines’ ability to attract more foreign direct investments. Therefore, at the start of a Binay administration, we will immediately push for amendments in the economic provisions of our Constitution. This move will make our economic growth more investment-driven rather than consumption-driven.

We plan to sustain and even expand the Pantawid Pamilyang Pilipino Program (4Ps) until it achieves its fullest potential. In 2010, the CCT benefitted only 700,000 families. Today, we are helping 4.4 million families break the cycle of poverty by offering their children elementary and high school scholarship grants. We want to expand the program by offering 100-percent college scholarship for top graduates of all public high schools in the country, thereby increasing their opportunities to a brighter future. In fact, results of a yet unfinished study by the DSWD show that 1.4 million households—at five heads per household, that is 7 million individuals—have been lifted above the poverty line. This can only grow larger once all the numbers get in. By any reasonable metric that we can measure at this moment, the CCT is succeeding in its objectives.

On top of all these, we will also boost the engines of development at the local level by widening the scope of Bottom-up Budgeting. Categorized as a capital outlay expense, P100 billion will be downloaded annually to all 1,490 municipalities in the country to fuel real, grassroots-level development. Pegged at P1,000 per capita, the funds will be allocated, spent, and monitored by the people themselves to address their local concerns, making for a truly participatory budget process that will empower communities at the grassroots level. Under this program, nobody will be left behind as the country finally takes off and reaches the next level of progress.