Agenda of the next president: Food security

Starting Feb. 9, 2016, the Inquirer is coming out with a 10-part series on pressing national concerns that should be high on the agenda of the five contenders in the May 9 presidential election. The series should help  Filipinos choose wisely the country’s next leader. 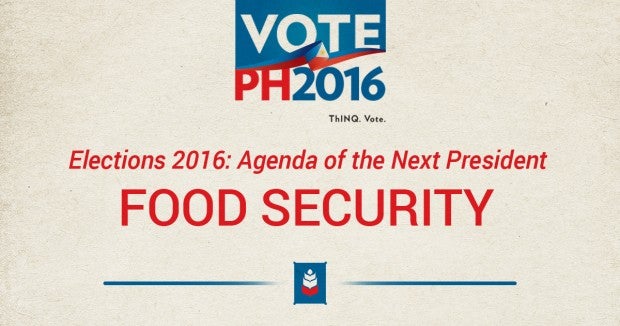 While the incidence of hunger is at its lowest level in the last quarter of 2015, it remains a pervasive problem in the Philippines. During the period, 2.6 million Filipino families reported experiencing hunger at least once, according to a recent Social Weather Stations survey. A Pulse Asia survey last December also found that 40 percent of Filipinos considered “having enough to eat” every day among their biggest problems.

INQUIRER.net is publishing verbatim the candidates’ action plans to address food security in the Philippines. For the summary of the 10 pressing issues, go to our special Elections 2016 website.

Food security, according to the 1996 World Food Summit exists “when all people at all times have access to sufficient, safe, nutritious food to maintain a healthy and active life.” In 2014, the Philippines was ranked 29th in the world in the Global Hunger Index. The index was based on three indicators: undernourishment, child underweight and child mortality.

For our country to have food security, the following policies will be promoted under a Binay administration:

Typhoons and other natural disasters gravely affect food production and livelihood of farming communities. As the top producers of food, agricultural communities must be given ample assistance to help avert the effects of climate change and natural disasters.

A Binay administration will create a program, in coordination with local government units, that will empower agricultural communities nationwide to become climate resilient.

We will educate farmers and their communities through seminars and other training programs on innovative ways of rice farming and harvesting that will enable them to adapt to the extreme effects of climate change to their livelihood.

We will also introduce and promote crop insurance to the farmers, since agriculture is very much vulnerable to the unpredictability of nature. With agricultural production representing a major source of livelihood for many Filipinos, the impact of natural disasters and other agricultural risks cannot be taken lightly. Crop insurance is a risk management tool designed to even out agricultural risks and address the consequences of natural disasters to make losses more bearable, especially to the marginalized farmers. In this regard, it is critical that alternative innovations be explored by the Philippine Crop Insurance Corp. such as making index-based and market-based insurance products and increasing coverage of the farming sector.

There is a need to shift our agricultural framework from the limited scope of farming to agribusiness. Agribusiness is a more encompassing term, which does not only include farming but other agriculture-related activities that allow farmers, processors, distributors and consumers under one system to produce, handle, process, transport, market and distribute agricultural products. Working under this framework, increasing agricultural productivity will entail not only raising productivity in farming traditional products but also starting agricultural diversification wherein high-value crops such as fruits and vegetables that are much more profitable than rice and corn are planted. This will be attained through the development and rehabilitation of existing infrastructure and facilities, as well as the modernization of agriculture and fisheries.

The government must implement capacity building programs to improve credit-worthiness of farmers, fisher-folks and their organizations to enable them to obtain financial loans. Access should be allowed through credit by freeing the land market and by lifting restrictions in agricultural free patents that inhibit negotiability of title. This will allow almost 2.5 million title holders to mortgage and transfer lands, as well as allow CARP titled lands to be used as collateral to loans. This, in turn, will free farmers from loan sharks.

Government must develop and pilot-test innovative financing schemes that would target farmer and fisherfolks who have no collateral and credit track record, e.g., allow biological assets as collateral for farm-related loans as well as having tripartite agreements among the farmers (who will plant, manage and harvest the crops), the banks (who will provide financing to the farmers by directly releasing the loan proceeds to the suppliers and service providers of the farmers) and the private corporations (who will guarantee the loan by agreeing to purchase all the crops harvested by the farmer).

We see agriculture as both an immense challenge and a lucrative opportunity that holds the key to our country’s development. At present, more than one-third of the population depend on agriculture as a source of income and livelihood yet it only comprises 11 percent of the GDP. An average farmer owns and tills about 3 hectares of land, earning a profit that is barely enough to sustain a family for a good half year, subject to the volume of yields produced.

On top of support that comes in the form of irrigation, we will invest in post-harvest facilities, which will minimize the losses that farmers presently incur in the processing, storage and transportation of their produce. By increasing the sector’s contribution to the national economy, we are increasing both the supply of rice and the opportunities for farmers to alleviate themselves out of poverty.

In addition to my programs on agriculture (see agenda on “Economy and Jobs”), I intend to boost food security by encouraging sustainable small-scale farming. This entails ensuring that small agricultural households have adequate income. My administration will: