Agenda of the next President: Corruption

Starting Feb. 9, 2016, the Inquirer is coming out with a 10-part series on pressing national concerns that should be high on the agenda of the five contenders in the May 9 presidential election. The series should help Filipinos choose wisely the country’s next leader. 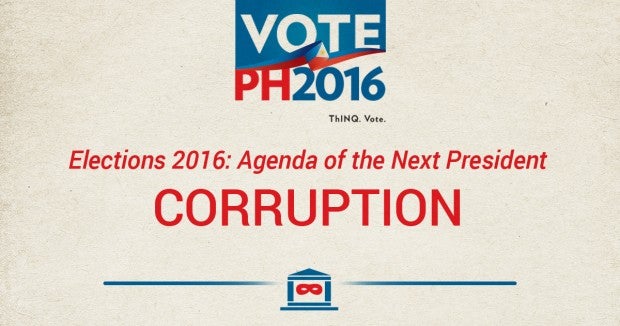 The fight against corruption in the Philippines has led to the conviction for plunder of a former President, the resignation of an Ombudsman, the impeachment of a Chief Justice and the incarceration of three senators. But much remains to be done, as shown by the 2014-2015 Social Weather Stations survey that found businessmen perceive the government agencies they deal with as corrupt.

INQUIRER.net is publishing verbatim the candidates’ action plans to address corruption in the Philippine government. For the summary of the 10 pressing issues, go to our special Elections 2016 website.

Transparency is the greatest deterrent to corruption. A Binay presidency will work to ensure the approval of the Freedom of Information (FOI) Bill.

Leadership by example will be institutionalized.  Simple living shall be the rule, with no exceptions, starting from the presidency itself.  The Freedom of Information Law shall be passed soonest.  The provisions of the Bank Secrecy Law shall be amended so that public servants shall not be protected when under investigation for possible anomalies.  The government will be streamlined to do away with redundant offices, as well as prevent conflicting mandates.  (Example: An Environment Protection Authority under the Office of the President shall be devolved from the mandate of the Department of Natural Resources.  A Consumer Protection Authority likewise from the mandate of business and investment promotion of the Department of Trade and Industry.)

One of the key elements of Daang Matuwid is our strong anticorruption foundation, which has enabled us to address the leakages in our system and restore the people’s trust in government by keeping true to the promise of “Kayo ang Boss.” The reason why we are now able to deliver quality services such as the 4Ps, PhilHealth, education, and infrastructure is that resources are being used for real projects, for real development. To this day, there are still forces that seek to return to the old ways, which is why the very premise of the campaign is to continue the fight against corruption and move forward to the next level of progress for our country where Filipino families are free from hunger, free from fear and free to dream.

We will invest in political institutions. It has been 30 years since we restored democracy in the Philippines. Yet, political institutions remain shaky. There exist no stable political parties in the real sense of the word. The Filipino people cannot hold accountable a political party for the mistakes of its candidates because it disappears as soon as the offending elected official leave office. This has to be corrected by passing a law authorizing the use of public funds to support dominant political parties. As president, I will also: