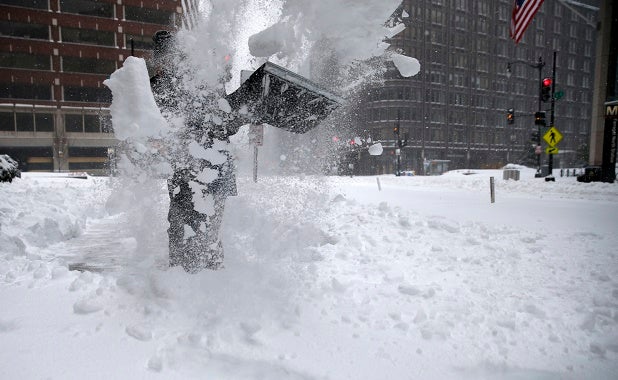 A worker shovels a walkway in downtown Washington, Saturday, Jan. 23, 2016. Millions of people awoke Saturday to heavy snow outside their doorsteps, strong winds that threatened to increase through the weekend, and largely empty roads as residents from the South to the Northeast heeded warnings to hunker down inside while a mammoth storm barreled across a large swath of the country. AP

More than 4,400 flights were cancelled as the mega-storm brought airports in New York, Philadelphia, Washington and Baltimore to a halt, shuttered transport in the US capital and prompted New York officials to issue a sweeping travel ban.

Fifteen people died in Arkansas, Kentucky, New York, North Carolina, Maryland and Virginia, while more than 200,000 people were left without power and 2,200 National Guard personnel were drafted in.

READ: Death toll from US snow storm rises to 15 — officials

Forecasters said the storm — dubbed “Snowzilla” — would last into Sunday with two feet (60 centimeters) expected in Washington and more than 20 inches falling in parts of New York, making it one of the Big Apple’s five biggest blizzards in history.

“Safety is our number one priority,” Cuomo told reporters.

“We’re trying to get ahead of it with the cleanup crew. And then we’ll see what Mother Nature has in store for us as we go on,” he told MSNBC.

Bus services were suspended at noon, and overland commuter and subway trains in and out of Manhattan were shut from 4:00 pm (2100 GMT) as Broadway cancelled performances, museums closed and shops shuttered.

Metro and bus networks were shut down in Washington for the entire weekend, and largely shut in Philadelphia and New Jersey on Saturday.

Strong winds are causing coastal flooding concerns for a large portion of the East Coast, the National Weather Forecast (NWS) warned, with streets in some New Jersey towns filled with water and ice.

Thousands of motorists were stranded for hours on highways in the south.

Plows struggled to clear New York streets, where parked cars were buried under the snow and visibility deteriorated as night fell. More than 20 inches of snow fell in parts of Brooklyn and at the city’s La Guardia and John F. Kennedy airports.

“We know that it is very rough outside, and in some cases, there have been reports of whiteout conditions for the past two hours. Visibility is extremely poor,” Washington mayor Muriel Bowser told reporters.

“The forecast suggests that the snow will wrap up late tonight or in the very early hours of this morning. But it doesn’t make it any less dangerous,” she added.

But one resident of the capital having a blast? Tian Tian, a panda at the National Zoo. Footage of him playing outside quickly went viral.

The NWS put a blizzard warning into effect for a large swath of the eastern United States as officials warned the storm could cause more than $1 billion in damage.

New Jersey Governor Chris Christie, a Republican presidential contender, left the campaign trail to oversee the emergency response in his snowbound state, where he said there were 90,000 power outages.

“For folks who lose power, please, given how cold the weather is, try to go and shelter in the home of a friend or family member if you can. Don’t stay in the cold,” he told a news conference.

The NWS reported that New York could see up to 25 inches of snow and that travel was extremely dangerous “due to heavy snowfall and strong winds with whiteout conditions likely.”

Mayor Bill de Blasio warned that more than 20 inches would put the storm in the top five in terms of accumulation since records began in the 19th century.

If the blizzard leaves more than two feet in Washington, as forecast, it could surpass a record set in 1922 by a storm that dumped 28 inches over three days and killed 100 people after a roof collapsed at a theater.

The national monuments, Capitol building and Smithsonian museums were all closed.

Even a massive snowball fight in Washington’s Dupont Circle, which 3,000 people said on Facebook they would attend, was postponed until Sunday due to the storm’s ferocity.

“We just came back from some holidays in India so the weather is a difficult adjustment,” said Justin Wilcox, 32, out taking selfies in the capital.