Trump: I could shoot someone and not lose votes | Inquirer News
Close
menu
search

Trump: I could shoot someone and not lose votes 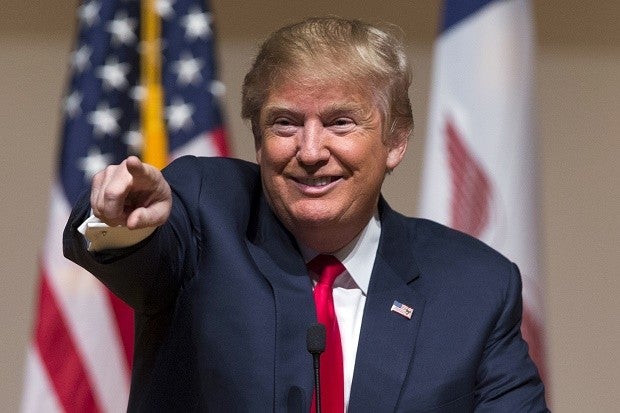 SIOUX CENTER, Iowa, United States — Donald Trump is so confident about the loyalty of his supporters that he predicted Saturday they would stick with him even if he shot someone.

The Republican presidential front-runner bashed conservative commentator Glenn Beck’s support of rival Ted Cruz and welcomed a figure from the Republican establishment, Sen. Chuck Grassley of Iowa, in rallies nine days before the Iowa caucuses open voting in the 2016 campaign.

“I could stand in the middle of Fifth Avenue and shoot somebody, and I wouldn’t lose any voters, OK?” Trump told an enthusiastic audience at a Christian school, Dordt College. “It’s like incredible.”

Beck campaigned for Ted Cruz and held little back in going after Trump. “The time for silliness and reality show tactics has passed,” Beck charged at a Cruz rally. He warned that a Trump victory in the Feb. 1 caucuses could have lasting consequences: “If Donald Trump wins, it’s going to be a snowball to hell.”

Trump demonstrated the extent to which some in the Republican establishment have begun to accept a potential Trump nomination when Grassley introduced him at a later event in Pella.

Grassley did not offer an endorsement, but his presence underscored Trump’s enduring positions at the top of the polls as voting approaches. Alex Conant, speaking for Marco Rubio’s campaign, was quick to note, however, that Grassley will introduce Rubio at an Iowa rally in a week.

At his Sioux Center event, Trump called Beck a “loser” and “sad sack.” Beck was one of nearly two dozen conservative thinkers who penned anti-Trump essays for National Review magazine — a hit Trump referred to repeatedly at the rally.

Cruz, running close with Trump in Iowa polls, was almost entirely focused on the billionaire in his Ankeny event, as he professed core conservative values and drew a sharp contrast with Trump on issue after issue, without using his name.

With obvious exaggeration, he charged that one Republican candidate, “for over 60 years of his life,” supported so-called partial-birth abortion and a “Bernie Sanders-style socialized medicine for all.”

Trump is 69 and unlikely to have had positions on abortion and health care as a child. Sanders, a liberal senator, is mounting a strong challenge to former Secretary of State Hillary Clinton in the race for the Democratic presidential nomination.

Cruz blasted Trump’s past reluctance to strip federal money from Planned Parenthood and cast the billionaire’s plan to deport more than 11 million people who are in country illegally as “amnesty” because he would then let many of them return.

Yet Cruz promised not to say “unpleasant things” about his top rival.

“I like Donald Trump,” he said. “He may say unpleasant things about me. I have no intention of responding in kind.”

Elsewhere in Iowa, Rubio stressed that he represents the next generation of conservative leadership as he started the dash to the caucuses at Iowa State University in Ames.

“Complaining and being frustrated alone will not be enough,” Rubio said. “It has to be someone who tells you exactly what they are going to do as president.”

Rubio recently stepped up his Iowa campaign appearances in hopes of breaking Cruz and Trump’s hold on the state in an effort to put himself in a stronger position leading into New Hampshire’s Feb. 9 primary.

Trump under fire for sexism after vulgar Clinton jibes