Pope Francis to address Church congress in Cebu via video 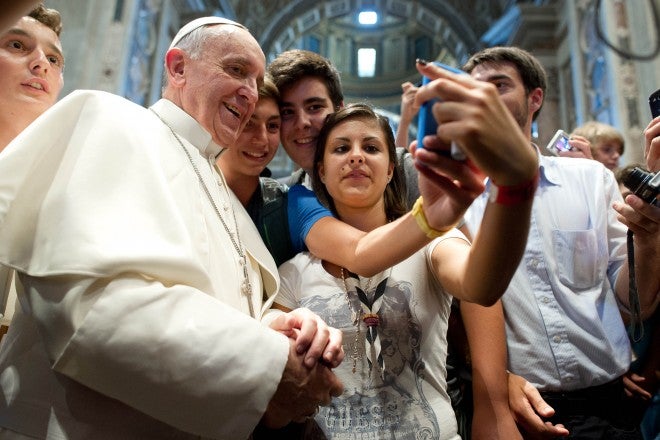 Tech savvy Pope Francis is shown in this Aug. 28, 2013 file photo, provided by the Vatican newspaper L’Osservatore Romano, having a selfie with young Catholic pilgrims inside St. Peter’s Basilica . The pope would be addressing via video the delegates to the 51st International Eucharistic Congress which starts today in Cebu City, a spokesman for the Archdiocese of Cebu told The Inquirer. AP PHOTO FILE

CEBU CITY – Pope Francis will have a special video message addressing the 51st International Eucharistic Congress (IEC), which starts today (Jan 24), during the closing Mass and ceremonies on Jan. 31, said the Archdiocese of Cebu.

“Yes,” replied archdiocesan spokesman Msgr. Joseph Tan when asked by the Inquirer if the Pope would make a special video message.

The Pope had been invited by then active Cardinals Ricardo Vidal of Cebu and Gaudencio Rosales of Manila to grace the IEC in Cebu upon his election in the conclave of 2013.

While he initially accepted, he had to beg off later especially since he had to visit the Philippines in 2015 to commiserate with the victims of typhoon “Yolanda/Haiyan” that swept the Visayas in November 2013.

His tight schedule did not allow him to come again to the Philippines for the IEC, Vatican officials said.

Cardinal Bo will be main celebrant of the opening Mass with Cebu Archbishop Jose S. Palma this afternoon at Plaza Independencia and the closing Mass next Sunday.

It is not extraordinary for popes to address important international church assemblies via video or satellite feed.

In January 2011, Pope Emeritus Benedict XVI gave a video message at the conclusion of the High Mass celebrating the 400th anniversary of the University of Santo in Manila.

Having been invited to the celebration, he declined due to old age but sent a papal legate, Cardinal Zenon Grochelewski, head of the Sacred Congregation for Education, the Vatican ministry of education.