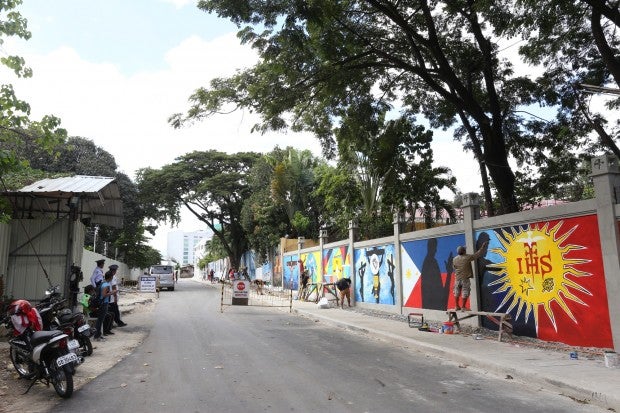 Artist of the group Cebu Artist Inc. and Portrait Artists Society of the Philippines Inc. made a mural painting on the concrete wall entering the International Eucharistic Congress (IEC) pavillion in preparation for the 51th meeting. CDN PHOTO/JUNJIE MENDOZA

CEBU CITY, Philippines—There’s such a thing as a free lunch.

Eight-year-old Paul Carlo Fortuna woke up to this thought on Saturday, the eve of the  opening of the 51st International Eucharistic Congress (IEC), when a festive lunch prepared by the Archdioceses of Cebu and Vancouver in Canada awaited 1,000 poor children here.

Fortuna, who rarely had delectable food, was ecstatic.

He said the lunch was a rare treat as he usually partakes of the Filipino poor man’s meal—rice  with salt or soy sauce—which is prepared by his aunt who takes care of him and his five siblings.

“We don’t have enough money so I seldom eat delicious food,” Fortuna, who was abandoned by his parents two years ago, told the Inquirer in Cebuano.

He was not disappointed.

A feast welcomed the children and their parents for whom 340 tables were reserved at the covered court of St. John XXIII Seminary in barangay Mabolo, Cebu City.

The sumptuous spread was aptly called “Table of Hope,” designed as it was to give poor people a “dignified participation” in the international evangelistic event.

Sinulog music and hymns in honor of Santo Niño de Cebu were played on huge audio speakers as the guests feasted.

Present during the activity were Archbishop Michael Miller of Vancouver, Archbishop Richard Gagnon of Winnipeg in Canada, Fr. Carmelo Diola of the IEC Solidarity and Communion committee and about 20 priests from Cebu and Canada.

Archbishop Miller said he was happy that the Church had reached out to the poor, who he said were close to God’s heart.

“This is a very beautiful event. We know that Jesus loves the poor more than anybody else. How can we do otherwise? The best way to celebrate the eucharistic congress is to have that great gift of people whom the Lord wants us to continue to take care of,” he said.

Miller celebrated a Mass before the start of the lunch. In his homily, he called on people to imitate Jesus in serving the poor.

“Jesus gave them his time because seeing the multitudes, he was moved with pity and compassion for them,” he said.

Priests and some lay delegates from Canada and the Philippines sat and ate with the poor during the activity.

“My joy couldn’t be bought. Let’s enjoy the moment,” Father Diola told reporters after the Mass.

He said he was at a loss for words after seeing how the event made the poor community happy.

Diola said he and the Archdiocese of Vancouver dreamed of reaching out to the poor as part of the celebrations for the IEC.

“This is not feeding. We are having a meal. And there’s a difference between the two. The IEC is not just an event but also a journey. What we have now is the result of people, groups and even countries coming together,” he said.

After the congress, Diola said he would do his best to perpetuate what had been started and for the Church to continue reaching out to the poor, not just by providing food, but also by teaching them the basics of the Christian faith.

Diola said he wanted poor people to feel they were not outcasts but part of the community.

He said the children were selected through a survey conducted in the parishes to identify the “poorest of the poor” in theie areas.

He said most of the children lived on the streets of Metro Cebu.

Another set of street kids will receive their first Communion on Jan. 30, the seventh day of the IEC.

“Poor people are around us. We cannot deny that. The spirit of the IEC is to acknowledge that they are there. And as the prayer of the 51st IEC says we should ‘walk humbly with the poor and the marginalized,’” he said.

The IEC, which takes place every four years, aims to promote an awareness of the central place of the Eucharist in the life and mission of the Catholic Church, to draw attention to the social dimension of the sacrament, and to help improve understanding of the liturgy.

Diola earlier considered “shortsighted and superficial” the government’s plan to round up street dwellers ahead of the IEC.

He said the government should collaborate with the Church for an organized charity work to find lasting solutions to the problem.

Diola, also the executive director of Dilaab Foundation Inc., a nonprofit organization in the Archdiocese of Cebu, has reached out to street children by catechizing and sending some of them to school.

So far, Dilaab Foundation Inc. has facilitated the first Holy Communion of about 50 street children.