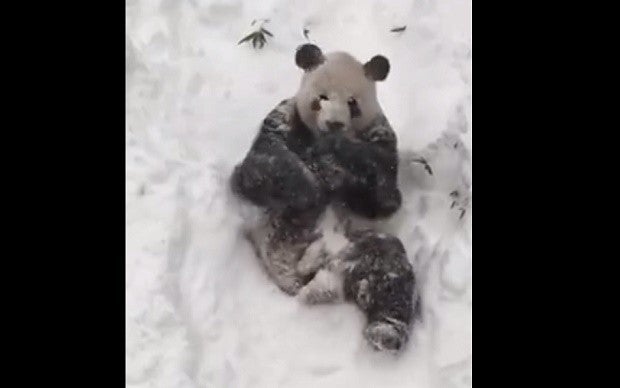 Tian Tian, an 18-year-old panda, frolics in the snow that has filled his cage at the Smithsonian National Zoo in Washington, USA. While much of the US East Coast has shut down due to a massive blizzard, Tian Tian appeared to celebrate the blanket of deep snow it has brought. SCREENGRAB FROM SMITHSONIAN ZOO’S FACEBOOK PAGE

WASHINGTON, United States — The Smithsonian National Zoo in Washington is closed due to a massive blizzard some have dubbed “Snowzilla,” but a video of one of the zoo’s four pandas enjoying the snow is making a lot of people smile.

The video was posted on the zoo’s Facebook page and on Twitter on Saturday morning. It shows 18-year-old, 264-pound (120-kilogram) panda Tian Tian rolling in the snow, throwing it on himself and lying on his back almost as if he’s making a snow angel.

The caption on the video reads: “Tian Tian woke up this morning to a lot of snow, and he was pretty excited about it.”

Watch the video here, or at Smithsonian Zoo’s Facebook page.

‘Snowzilla’: Blizzard blankets eastern US; worst is yet to come

Read Next
Court junks P627-M graft case vs gov after long delay
EDITORS' PICK
Nestlé Philippines’ ‘NESCAFÉ Plan’ bags Grand Anvil at PRSP 56th Anvil Awards
Smart reinforces superiority with best speed and mobile video experience in PH
Every Filipino home can now be a smart home with realme TechLife
New 3,045 COVID-19 cases push PH total active cases to 40,074
LTO’s P500-M deal for screws draws scrutiny
How to lose a PH genius: Wesley So officially a US citizen
MOST READ
How to lose a Filipino genius: Wesley So officially a US citizen
US lays out list of aid to ‘satisfy’ Duterte following VFA payment demand
Robredo on Sara Duterte leading poll surveys: Why are Filipinos drawn to leadership of this kind?
Duterte order to police, military on Reds: ‘Kill them all’
Don't miss out on the latest news and information.