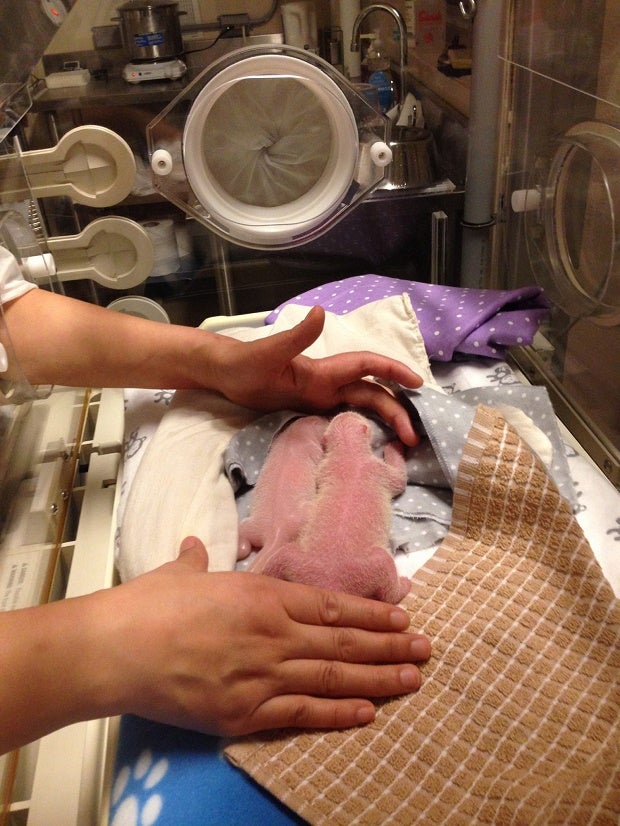 In this photo provided by the Toronto Zoo, two baby pandas are shown after they were born, Tuesday, Oct. 13, 2015, in Toronto. Zoo staff say the cubs and their mother, Er Shun, a panda on loan from China, “all appear to be doing well,” but note the next few days and weeks are critical and all three will be monitored around the clock. It’s the first time giant pandas have been born in Canada. AP

Er Shun, one of two pandas on loan to the zoo from China, gave birth earlier in the day to twins weighing just 187.7 and 115 grams.

Pandas are born blind and are only the size of a stick of butter. The cubs, which are 1/900th the size of their mother, are pink in color with short and sparse white fur.

The two newborns, however, are very vulnerable and the coming days—which they will spend mostly in an incubator under observation by Canadian and Chinese panda experts—will be “critical to their survival.”

“We are so proud to be contributing to the ongoing survival of this endangered species,” zoo chief John Tracogna said in a statement.

Er Shun and Da Mao arrived in Toronto in 2013, and were welcomed by Prime Minister Stephen Harper and his wife. They will be moved to the Calgary zoo in 2018 for a five-year stay before returning to China.

The father of the cubs could be one of three pandas, including Da Mao, after Er Shun underwent two artificial insemination procedures in May, the zoo said.

Panda twins were born at Washington’s Smithsonian National Zoo in August, although one died of pneumonia within a matter of days.

The surviving cub was named Bei Bei by US First Lady Michelle Obama and her Chinese counterpart, Peng Liyuan.

Read Next
3 dead in Jerusalem’s bloodiest day of rising unrest
EDITORS' PICK
Nestlé Philippines’ ‘NESCAFÉ Plan’ bags Grand Anvil at PRSP 56th Anvil Awards
Smart reinforces superiority with best speed and mobile video experience in PH
Every Filipino home can now be a smart home with realme TechLife
New 3,045 COVID-19 cases push PH total active cases to 40,074
LTO’s P500-M deal for screws draws scrutiny
How to lose a PH genius: Wesley So officially a US citizen
MOST READ
US lays out list of aid to ‘satisfy’ Duterte following VFA payment demand
How to lose a Filipino genius: Wesley So officially a US citizen
Robredo on Sara Duterte leading poll surveys: Why are Filipinos drawn to leadership of this kind?
Kris Aquino dispels rumors on son Josh getting married, thanks Ogie Diaz for defending him
Don't miss out on the latest news and information.