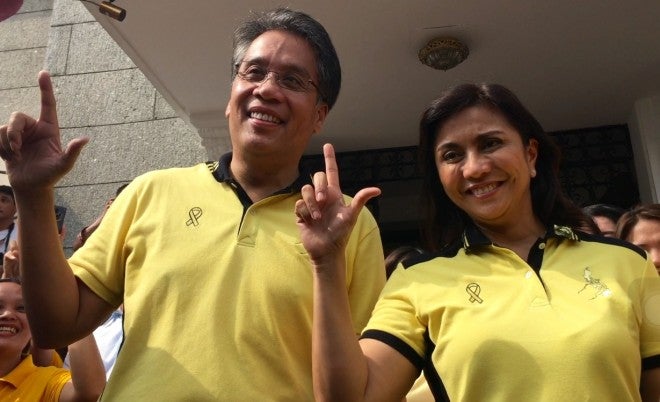 “It’s true that administration candidates will suffer because we are the ones to take the hit,” the Camarines Sur representative told reporters in Bicol.

But Robredo said she thought the President did the right thing in spite of how unpopular his decision might prove to be.

“The easiest thing for him to do was to approve [the bill], because… he would look good, the Liberal Party would look good,” said the widow of Interior Secretary Jesse Robredo.

She added, however, that she still needed to study Aquino’s veto message to understand it better. “For me, [the increase] will do plenty of good, but if it’s true that [SSS] will go bankrupt in 11 years, then we need to think it through.”

In Malolos, Bulacan, President Aquino said he was standing by his veto of the proposed pension hike, saying he would rather be called “heartless” today than “heartless and careless” a decade from now.

“I believe that as the father of the nation, I have to plan for future needs and not respond only to what is needed at present. So I am ‘heartless’ today,” Mr. Aquino said.

“(But) if in 2027, (the SSS) goes bankrupt, (then) the more than 30 million pensioners would say I am careless and heartless at the same time. That I did not think of them, that I made sure the state would not be able to deliver its promise to them,” the President told reporters in a news conference.

In his veto message on Thursday, Mr. Aquino said the SSS pension bill approved last month by Congress would compromise the viability of the agency, which would be forced to make a yearly payout of P56 billion.

The Chief Executive said he was given a choice: “I could try to look good and help (in) the endorsement (of administration candidates) and maybe by 2027, I would be forgotten and won’t be blamed (for the SSS bankruptcy). The one who would take the blame would be the one governing us by that time. But is that right, for me to bring the people towards their own misery?” he asked.

President Aquino cited the government’s “social nets,” including the services provided by the Department of Health and PhilHealth, as benefits that pensioners could avail themselves of.

Mr. Aquino admitted that he was aware his veto could be exploited by the opposition and that he risked making an unpopular decision in the run up to the election campaign that begins on Feb. 9.

The President also defended the fat bonuses received by SSS officials, saying that the granting of bonuses went through “a long process” implemented by the Governance Commission for Government-Controlled or -Owned Corporations (GCG).

While LP standard-bearer Mar Roxas “understands the reason for the veto, he also wants to find an alternative to the P2,000 across-the-board increase,” said Akbayan Rep. Barry Gutierrez, the spokesperson of the LP-led coalition.

“A middle ground between the immediate benefit to current pensioners and ensuring the stability of the fund for current contributors should be found,” Gutierrez said.

LP spokesperson Edgar Erice meanwhile praised Mr. Aquino for refusing to make a politically expedient decision and “not thinking about elections but what is good for our country.”

He added: “We cannot spend money that we do not have. It’s just like selling your product at a very low price that in the end your store will go bankrupt.”

Marikina Rep. Miro Quimbo, chair of the House of Representatives ways and means committee, said the backlash against President Aquino’s unpopular decision “will be temporary.”

Being part of the LP coalition, he said, was “both an advantage and a responsibility. ‘Daang matuwid’ means doing the right thing, popular or otherwise. That’s precisely why the President has the highest approval rating for an outgoing President in our history.”

The Marikina representative also proposed another compromise to the vetoed pension hike, and said that SSS pensioners could be given an increase based on their contributions.

In Pozorrubio, Pangasinan, Bayan Muna Rep. Neri Colmenares, principal author of the proposed hike,  has started a congressional campaign to overturn President Aquino’s veto of the proposed hike in pension funds, even as presidential aspirant Sen. Grace Poe expressed her support for the override.

“I have the inclination to [support the] override because as [Colmenares] says, there is a source for the fund. There is only a need to [achieve] effective collection [of membership obligations],” Poe said during a news conference here after attending the annual Talong Festival in Villasis town.

Sen. Francis Escudero, Poe’s running mate, said he would also work to overturn Mr. Aquino’s veto. “I understand where the President is coming from, but we also have a job to do as lawmakers,” Poe’s running mate said.

Colmenares, who joined Poe’s group, said it was incumbent on him to sponsor the override bill because he authored the pension increase bill in the House.

Senatorial candidate and Leyte Rep. Ferdinand Martin Romualdez meanwhile demanded a full accounting of SSS funds and collectibles to validate government claims that it could not afford to grant the proposed P2,000 increase.

Romualdez cited reports that the SSS failed to collect P13 billion from delinquent employers as of 2014, while aging member loans had reached P64.01 billion, of which P19.407 billion had been outstanding for more than 5 years.

The congressman also noted that out of 164,111 delinquent employers in 2010 alone, the SSS had filed only an average of 1,200 cases per year.

“Divide that and the difference will show that more than 100 years shall have passed before the SSS collects from these delinquents. This is assuming that some of them would still be alive by then and their businesses are still open,” he said. With a report from Yolanda Sotelo, Inquirer Northern Luzon