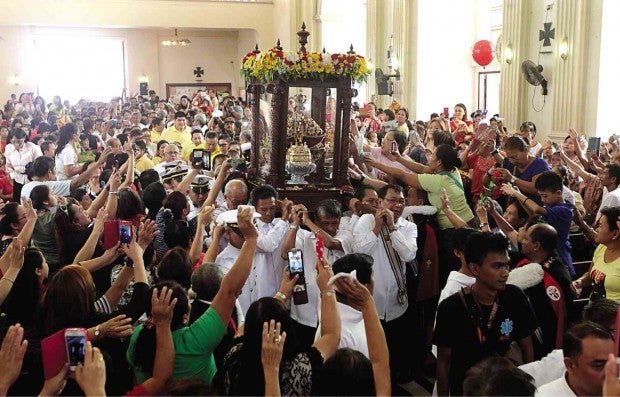 SACRED RITUAL The centuries-old image of the Santo Niño arrives at the National Shrine of St. Joseph in Mandaue City, Cebu province, on Friday after a procession marking the start of the feast of the Holy Child Jesus, locally known as Fiesta Señor, on Sunday. This year’s feast carries the theme “Santo Niño: Wellspring of Mercy and Compassion.” TONEE DESPOJO/CEBU DAILY NEWS

CEBU CITY, Philippines—Former inmate Temoteo Lucernas woke up early on Jan. 7 to fulfill a promise to someone he credited for his newfound liberty: the Sto. Niño.

At 5 a.m. that day, two of the six bells at Basilica Minore del Sto. Niño in downtown Cebu City pealed again for the first time in more than two years since the devastating 7.2-magnitude earthquake destroyed the historic bell tower.

Thousands of devotees applauded and shouted “Viva Pit Señor!” when the image of the Sto. Niño arrived at the centuries-old church after a procession that opened the novena leading to the feast of the Holy Child Jesus on Sunday.

Young and old devotees carried with them images of the Sto. Niño as they recited the rosary and sang religious hymns amplified by speakers and aired live on radio.

“Sto. Niño set me free. This is my first Fiesta Señor after I was released from jail.  And now I’m here to give him thanks. He never abandoned me. I have been a recipient of God’s mercy,” Lucernas told the Inquirer.

Lucernas spent 10 years in jail after he was accused of raping a neighbor in San Francisco, Camotes, Cebu in 2005.

While behind bars, Lucernas had one prayer: A second chance in life.

Lucernas’ plea was granted in February 2015 after the court cleared him of rape charges which he said stemmed from a fabricated accusation.

As a witness of God’s mercy, Lucernas chose to remain at the Cebu Provincial Detention and Rehabilitation Center, not as an inmate but as an adviser to detainees and an all-around maintenance man—his way of giving back to jail personnel and God for the blessings he had received.

This year’s Fiesta Señor carries the theme “Sto. Niño: Wellspring of Mercy and Compassion,” which echoes the celebration of the Extraordinary Jubilee Year of Mercy declared by Pope Francis.

The reinstallation of the bells itself was a cause for celebration.

“How wonderful it is to see our bell tower rise again and to hear the sound of the bells after a long time. All these are God’s gifts,” Fr. Jonas Mejares, rector of the basilica, said to start his homily.

The bell tower crumbled during the Oct. 15, 2013 quake. Its reconstruction was finished recently although finishing touches were still ongoing.

The reconstruction of the basilica’s belfry is supervised by the National Historical Comission of the Philippines (NHCP), which allocated P13,670,672.90 for the project.

The NHCP will turn over the newly constructed belfry to the basilica’s Augustinian fathers on Jan. 23., an event to be attended by President Aquino.

While the basilica’s bell tower has been restored to its original design, not all seven bells will be reinstalled.

The biggest bell will no longer appear in the tower. “We have to reduce the belfry’s weight because it poses risks during earthquakes,” Mejares explained.

The biggest bell, which weighs a ton, will be placed inside the basilica compound to remind people of the 2013 earthquake that destroyed the belfry.

Of the six smaller bells, three have been reinstalled.

They were manually sounded during the 2-kilometer “Penitential Walk With Jesus” from Fuente Osmeña to Basilica del Sto. Niño at 4 a.m. on Thursday.

The basilica’s courtyard, which can hold 3,500 people, has been packed at every novena Mass since Jan. 7.

Devotees who spilled over to the streets surrounding the church watched the Eucharistic celebration on large LED screens and television monitors installed around the basilica.

People waved their hands every time they sang “Bato-Balani sa Gugma,” an ancient Cebuano hymn for the Sto. Niño.

The basilica complex has been open 24 hours a day from Jan. 7 until the feast day on Jan. 17 to accommodate the thousands visiting the church.

Except on Jan. 7 and 15, when there were dawn processions, 11 Masses were to be held at the outdoor Pilgrim Center every day leading to the feast day of the Sto. Niño on Sunday.

A prayer walk from Fuente Osmeña to the basilica was held for the Walk with Mary at 4:30 a.m. on Friday.

It was followed by the misa de traslacion before the start of the motorcade that brought the pilgrim images of the Sto. Niño and Our Lady of Guadalupe de Cebu to the National Shrine of St. Joseph in Mandaue City.

Instead of a direct route from the Basilica Minore del Sto. Niño to Mandaue, the ritual transfer of the images to the National Shrine of St. Joseph traversed more streets to allow residents of Barangays Banilad and Bakilid in Mandaue to witness the annual traslacion, a highlight of the Fiesta Señor.

“We want other people to also experience the joy of seeing the Sto. Niño pass by their homes,” Mejares said.

The images stayed at St. Joseph’s Shrine for an overnight vigil.

At 6 a.m. on Saturday, the images of the Sto. Niño and Our Lady of Guadalupe would sail down the Mactan Channel for the annual fluvial procession from Ouano Wharf in Mandaue to Pier 1 in Cebu City.

The sea procession would be followed by a reenactment of the planting of the Cross, a Mass and the baptism at the basilica’s pilgrim center.

At 1 p.m. the solemn procession of the Sto. Niño will be held, passing through major streets in Cebu City before returning to the basilica for a Mass.

On the feast day on Sunday, Cebu Archbishop Jose Palma will preside over a pontifical Mass at 6 a.m., three hours before the city’s major streets are closed for the Sinulog Grand Parade. TVJ