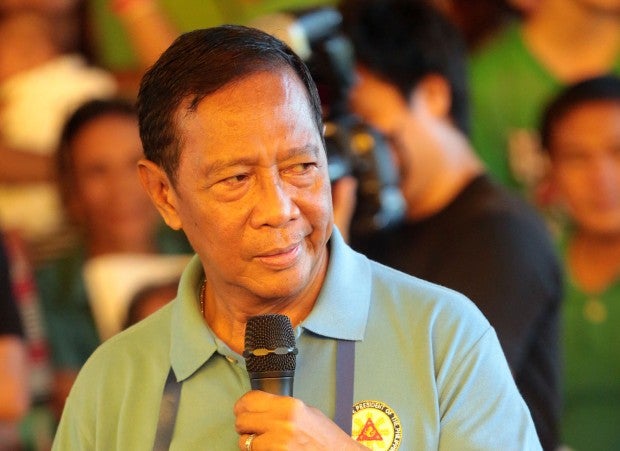 With less than four months to go before the crucial 2016 presidential election, and despite a barrage of graft allegations, Vice President Jejomar Binay has reemerged as the front-runner to become the country’s next President, according to the latest Social Weather Stations (SWS) survey.

Binay, whose poll numbers plunged last year when allegations emerged that he and his son, both former mayors of Makati City, had taken huge kickbacks from municipal projects, had regained a clear lead with 31 percent expressing a preference for him in the Jan. 8 to 10 survey period, the SWS said.

With an error margin of plus or minus 3 percentage points, erstwhile front-runner Sen. Grace Poe, who was tied at No. 1 with Binay in the previous December survey, was now in a statistical deadlock with the ruling Liberal Party standard-bearer Mar Roxas, at 24 percent against Roxas’ 21 percent.

“It is too early to say that Vice President Binay is already pulling away. A lot can still happen in three months,” said political science professor Edmund Tayao.

Many Filipino voters have yet to make up their minds months before the May 9 elections, noted political analyst Ramon Casiple of the Institute for Political and Electoral Reform think tank.

“Binay’s lead of 7 points is only a little over the margin of error and may still change,” said Tayao, noting that the three other candidates behind Binay are in a statistical tie.

Tayao said the increase in Binay’s ratings could be attributed to his campaign style, as well as to issues that have also plagued the other presidential candidates.

“Binay’s ratings increase could also be due to the fact that other candidates have issues of their own, which may have caused some of their supporters to transfer to Binay,” he said.

“It is also worth noting that the Vice President has been extensively campaigning all over the country. The traditional campaign mode of going around, meeting people personally is an advantage on his part,” Tayao said.

Casiple explained the ratings rise to the fact that “some people are cynical, reasoning that all politicians are corrupt anyway.”

Casiple said some support for Poe and Duterte eroded due to the disqualification cases filed against them.

The Commission on Elections ruled last month that Poe, a foundling of unknown parentage who was adopted by movie stars Fernando Poe Jr. and Susan Roces, was not a natural-born Filipino and lacked the required 10-year residency to run for President. The case is on appeal at the Supreme Court.

Duterte registered as a candidate after the Oct. 16, 2015, deadline to replace another candidate who backed out. He is also facing several disqualification cases on this issue.

Reacting to the latest SWS voter preference survey results, Poe yesterday called on her supporters to inform the public that she remains a candidate for President.

A spokesperson for Binay, who is in Abu Dhabi, released a statement on his behalf on Friday. “The Vice President is humbled by the people’s trust in his capability to lead our country,” said the statement from Rico Quicho, Binay’s spokesperson for political affairs. 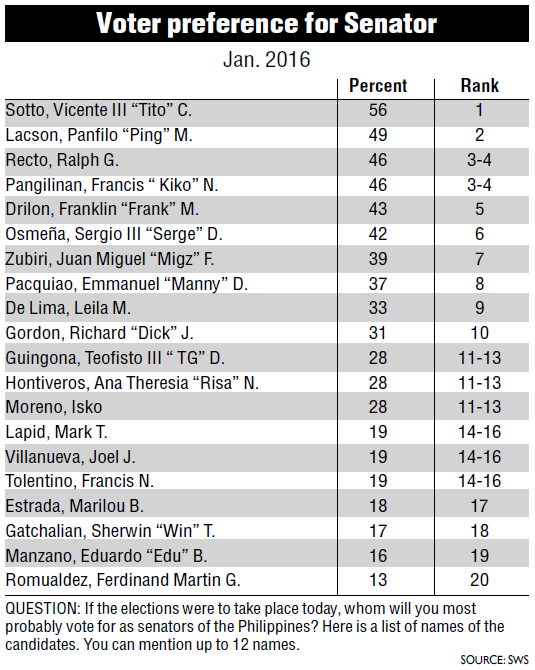 The Liberal Party spokesperson, Barry Gutierrez, was unimpressed by Binay’s front-runner reemergence, saying it was only the “fruit” of his early campaigning. “The moment Binay sat as Vice President, he already started campaigning for President,” he said.

“Like we always say, the real survey is in May,” said Gutierrez.

Meanwhile, Tayao noted that name recall and the “Ilocano vote” could be the factors behind the increase in Marcos’ rating.

“The Marcos name still has recall, and this is still a plus for Senator Marcos,” he said.

The so-called “Solid North” could also be a factor in Marcos’ favor. “The Ilocano vote has been proven to have delivered in previous elections,” Tayao said.

As to whether or not the martial law regime of Marcos’ dictator father was a factor, Tayao said: “It’s not that the people have forgotten. It could be that many have been disillusioned with the Edsa revolution because some expectations were not fulfilled.”

“A lot of people are also judging Marcos based on his performance in the Senate. His reputation is that of an able senator,” Tayao said.

The survey used 1,200 respondents nationwide. The SWS said it used face-to-face interviews with validated voters, or registered voters whose digital biometrics had been validated by the Commission on Elections. With reports from DJ Yap, Leila B. Salaverria, Tarra Quismundo and AFP