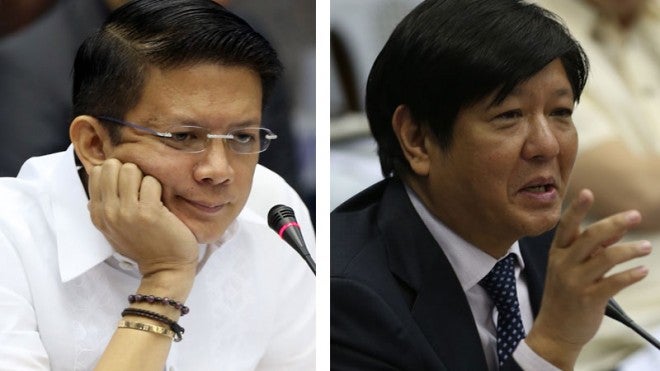 In a five-way race for Vice President, Sen. Francis “Chiz” Escudero would be the voters’ most preferred candidate, with 43 percent of respondents choosing him, according to a Pulse Asia survey.

The survey was conducted from Sept. 8 to 14, the same period as the Pulse Asia poll on voter preferences for President and Vice President, released in late September.

But the results for the vice presidential race that Pulse Asia released in September featured 12 candidates, with Sen. Grace Poe still included among the choices for the post.

It was only on Sept. 16 that Poe declared that she was running for President. The following day, she and Escudero announced their team-up.

The poll for the five-way vice presidential race was an embargoed question in the Pulse Asia survey, according to the source who provided the Inquirer with a copy of the results.

The respondents were given the five names and asked: If the following are the ones who will become candidates for Vice President, whom would you vote for if the 2016 elections were to be held today?

The survey was conducted before Robredo accepted the Liberal Party’s offer to be the running mate of its standard-bearer Mar Roxas, and before Cayetano and Marcos confirmed their plans to run for the same post.

As for Trillanes, he had already announced in media interviews that he was sure to run for Vice President when the survey was conducted. But it was only last weekend that he formally launched his bid.

Of the five, only Escudero and Robredo have presidential running mates.

In the survey featuring the five names, Escudero led the other candidates in all locations surveyed—National Capital Region, the balance of Luzon, Visayas and Mindanao. He got the highest rating, 48 percent, in Mindanao. He was also the top choice across all socioeconomic classes.

Pulse Asia president Ronald Holmes confirmed in a phone interview that there was an embargoed question in its last survey involving five names for the vice presidency.

Bongbong Marcos: I accept the challenge of the new generation