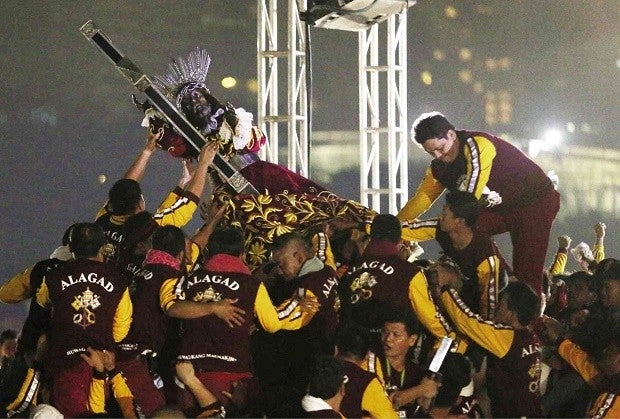 As dawn breaks in Manila on Saturday, Jan. 9, 2015, members of the religious fraternity Hijos del Nazareno place the Black Nazarene on a carriage for the grand procession that returns the revered image from the Quirino Grandstand in Rizal Park to the Quiapo Church. MARIANNE BERMUDEZ / PHILIPPINE DAILY INQUIRER

At least two casualties were reported in a faster traslacion (passage) of the Black Nazarene on Saturday, police officials said of the annual procession marking the feast of the Christ image.

According to Bong Grajo, operations head of the Quiapo Church command center, the image could be back inside the church by 4:15 a.m.

The procession started at 6 in the morning and traced a 7-kilometer route from Quirino Grandstand in Rizal Park to Quiapo Church.

Police said a 27-year-old man from Sampaloc died while taking a break from carrying a replica of the Black Nazarene image.

Philippine Red Cross (PRC) Secretary General Gwendolyn Pang said the fatality, Alex Fulyedo, had seizures while resting near SM Manila, which prompted his companions to seek medical assistance from PRC. Pang said her team took Fulyedo to Ospital ng Maynila where hospital staff tried to revive him, to no avail. Fulyedo was declared dead on arrival at noon, Pang said.

In a press conference in the afternoon, Quiapo Church officials offered their condolences to the families of Fulyedo and Arabit, and said that aside from “spiritual assistance,” they will also extend other forms of assistance to the bereaved families.

Fulyedo, Coronel said, suffered a seizure and had been diagnosed two years ago with chronic liver disease.

The parish priest said that while the two deaths were not directly related to the traslacion, they were still considered casualties of the annual celebration since they were devotees who died on the feast of the Black Nazarene.

The PRC said it had assisted more than 1,200 patients as of 6 p.m. with most of them asking that their blood pressure be checked.

Grajo said this year, the image was at the vicinity of the Manila City Hall by 10 a.m., faster than in previous years when it reached the same area at 2 p.m.  Last year, the procession reached the church after more than 19 hours, while in 2012, owing to a busted tire of the carriage, it managed the same journey in   22 hours.

The church operations chief credited the possible early return of the image to “better coordination” among various government agencies and the private sector tasked to handle the annual devotion.  People joining the traslacion were also “more orderly” and “more cooperative” this year, he added.

“The Nazarene gave meaning to my life,” said Nino Barbo, a 30-year-old high school dropout with an upper arm tattoo and a metal earring.

The construction worker said he gave up a day’s pay for sixth year in a row by skipping work to touch the statue, which many devotees believe can heal the sick and bring good luck.

Risking life and limb, barefoot men and women like Barbo clambered over each other to touch the icon with white handkerchiefs or towels as others pulled on a rope to haul the metal float bearing the statue through the labyrinthine streets of Manila’s old quarter.

By noon, police said 1.5 million devotees—most of them wearing yellow or maroon shirts—had joined the procession. Yu said at least 150 people were treated for various injuries and complaints in the first five hours of the parade, including two with suspected broken bones.

Housewife Dang Villacorta sat on the grass at the park between her sleeping son and a blue beach tent packed with other relatives. She planned to wave a white handkerchief when the procession crawled past, she said, adding that along with a sponge bath, she wiped it on family members when they got sick so they wouldn’t have to spend money on doctors.

Critics say the procession amounts to idolatry, but Church authorities consider it a vibrant expression of faith in one of the world’s most fervently Catholic nations.

“The people reach out to it because they have a personal relationship with God,” said Coronel. “They come to me and say the Lord has performed miracles for them. To the devotees he is for real,” he told reporters earlier in the week, adding that he expected “millions and millions” to take part in the procession.

Cloaked in a maroon robe, crowned with thorns and bearing a cross, the Nazarene statue was brought to Manila by Augustinian priests in 1607, decades after the start of Spain’s colonial rule.   It was believed to have acquired its color after being partially burned when the galleon carrying it caught fire on a voyage from Mexico, another Spanish colony at the time.

The procession was peaceful, so far, said National Capital Region Police Office (NCRPO) head Director Joel Pagdilao, who said that, as of 3 p.m., only one incidence of crime—a snatching—had been reported by the over 4,000 policemen deployed in the area surrounding Quiapo Church.

Quoting a report, Pagdilao said the suspect, Mark Gallos of Old Sta. Mesa, had been arrested, and the stolen cell phone of Mark Cabubas, 44, a shoe designer, recovered.

The Metropolitan Manila Development Authority said that as of 3 p.m., it had collected 17 truckloads of trash, mainly from Rizal Park, where most devotees had stayed while waiting for the procession to start.

Francis Martinez, head of the Metro Parkway Clearing Group, said the 600 streetsweepers deployed in the area collected trash that consisted mainly of styrofoam, cardboard used as mattresses, plastic bottles and plastic bags.  The collected waste will be dumped in Pier 18, he added.

Do not judge the devotees joining the frenzy during the annual Black Nazarene traslacion, Manila Archbishop Luis Antonio Cardinal Tagle said, adding that the devotees had no one to turn to except the cross-bearing Christ.

“Have you ever experienced having no one or nothing to cling on to?”  Tagle asked the crowd attending the early Saturday Mass at the Quirino Grandstand ahead of the traslacion.

The cardinal said that this year’s traslacion of the Black Nazarene is particularly meaningful as it falls within the Year of Mercy declared by Pope Francis, and the local Church’s observance of the Year of the Eucharist and the Family.  Reports from Kristine Felisse Mangunay,  Tina G. Santos and AFP

A devotee’s wish: P30-M retirement fund for every Filipino