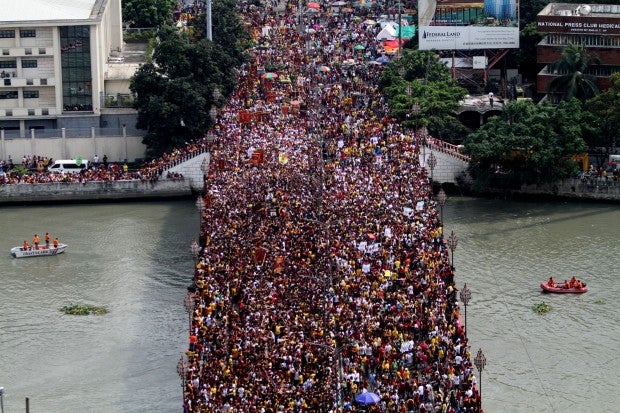 BRIDGE OF FAITH. The carriage of the Black Nazarene with sea of devotees crosses Jones Bridge in Manila during the ‘Traslacion’. INQUIRER PHOTO / RICHARD A. REYES

The Quiapo Church on Saturday expressed sadness and sympathy over the reported deaths of two people during the feast of the Black Nazarene.

“I will personally go to the burial and get in touch with the families. Lahat ng possible assistance na magagawa natin, gagawin natin,” he said, adding that the parish will extend financial assistance if needed.

Arabit of Binangonan, Rizal, a candle vendor, died due to acute coronary syndrome on Evangelistra Street even before the start of traslacion at the early hours of Saturday.

Responders tried to revive Fulyedo through CPR, but he was pronounced dead on arrival at Ospital ng Maynila at 12:44 p.m.

As of writing, there has been no report of a devotee who died while still part of the procession of the 400-year-old ebony statue of the cross-bearing Christ.

Last year, two devotees died during the traslacion, including a member of the Hijos del Nazareno, who escort the religious icon from Luneta to Quiapo Church. IDL