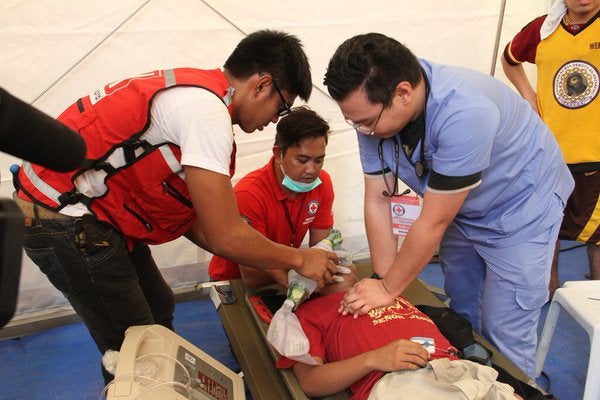 Personnel from the Philippine Red Cross conduct CPR and defibrillation on a 27-year-old Black Nazarene devotee who was found “lifeless” near the Manila City Hall. PHOTO FROM THE PHILIPPINE RED CROSS

A 27-year-old devotee died on Saturday morning during the annual “traslacion” or procession of the Black Nazarene.

Gwendolyn Pang, secretary general of the Philippine Red Cross, said the male devotee was found “lifeless, breathless, and pulseless” after he joined the procession. The incident happened near the Manila City Hall before noon Saturday.

Pang, however, refused to reveal the identity of the victim until his family has been informed.

As of Saturday morning, at least 1.5 million have joined the procession and was expected to swell to over nine million as the Black Nazarene icon makes its way back to Quiapo Church.

In 2015, two devotees died during the procession. IDL