newsinfo / Nation
Nation
SHE BELIEVES ‘FAITH WITHOUT WORK IS DEAD’

A devotee’s wish: P30-M retirement fund for every Filipino 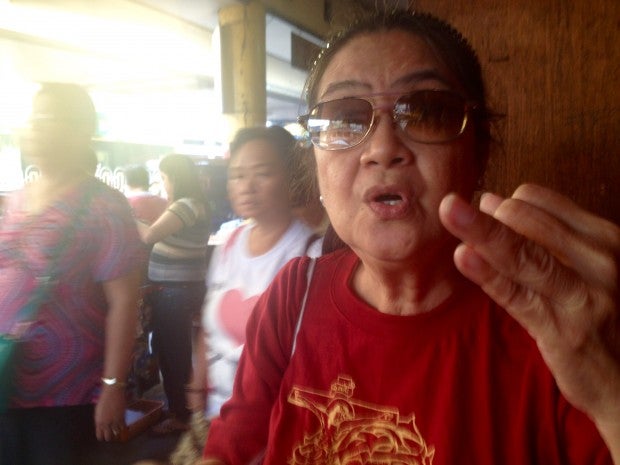 Retired doctor Ma. Remedios Resurreccion, 64, of Tondo, Manila has a 30-million worth wish for the Black Nazarene. ANTHONY Q. ESGUERRA/INQUIRER.net

“After you work hard and eventually retire by the age of 65, you should have 30 million (pesos) in your bank.”

Every year, this has been the wish of a 64-year-old devotee of the Black Nazarene, making it part of her “deepening” devotion to the ebony-hued 17th century image.

Dr. Ma. Remedios Resurreccion, who’s has been a medical technologist, university professor and later in her life a hospital administrator, said that every Filipinos deserve at least 30-million-peso worth of retirement fund.

“That is too little compared to how much an employee pours in his or her entire life working and serving this country,” Resurreccion told INQUIRER.net in an interview.

The P30 million, she said, should not be paid to people in cash but the government must allocate these to the healthcare and other needs of the retirees.

The retired doctor, who hails from Tondo, Manila, said that employees cannot just live in a twenty-thousand-a-month salary. It must be triple, she said.

Saying that crimes and disorder are brought about by injustice, people in informal economy should at least get 3,000 to 4,500 a month, she added.

“But if we will have that kind of money in our pockets, our government and our commercial sector should not conspire to raise the prices of commodities. Then there’s no sense,” she stressed.

She said that life for the retirees like her was always struggle especially that she and her husband had no children who can support them.

(The prices are up. Healthcare is expensive. Eating right for your health is also expensive.)

‘Faith without work is dead’

But how will her “wish” come true? Or will devotion to the Black Nazarene alone suffice?

(Professionals and sub-professionals should unite. We will not reach out to the senators. We will not go to the Congress. We don’t need to talk to the President because they are burdened already.)

“We will talk to the banks. We will reach out to the bankers. They will manage the distribution of wealth,” she explained.

Resurreccion said the banks in the Philippines were only “transactional,” meaning they only provide services for savings and investment.

She said she believed that banks should manage and distribute the wealth properly for inclusive growth.

Asked if what she envisioned could be legal and realistic, she said nothing was impossible if the people will unite.

“We need to be united. We need to demand this. To do this as one holy Catholic apostolic church,” she said.

(We have faith but are we working together? Like the saying goes, ‘Faith without work is dead.’ What is that, we believe but we don’t put it into action?) TVJ

Devotion to Nazarene a way of giving thanks, sacrifice