Devotion to Nazarene a way of giving thanks, sacrifice

Despite waiting in line for hours, siblings Asher and Keith Ayeras have braved the heat of the sun just to touch and kiss the statue of the Black Nazarene.

“This has been our devotion. This is our sacrifice for the Lord,” 10-year old Keith told INQUIRER.net.

His older brother, Asher, said their devotion to the Black Nazarene had been a family tradition.

“Our family does this every year,” Asher said.

The Ayeras siblings are among the millions of Nazarene devotees who troop to the Quirino Grandstand in Manila for the annual traditional pahalik or kissing of the 400-year old statue.

Devotees who will be joining the Feast of the Black Nazarene this year are expected to swell to over nine million.

Asher and Keith were with their parents and another younger sibling during the pahalik on Friday morning.

“I hope that the bonds of our family will be stronger,” Keith said, adding that he also prayed for guidance in his studies.

At an early age, the two siblings knew the importance of their devotion.

“(Through this devotion) we hope to somehow repay Jesus for his sacrifice when He was nailed to the cross,” Keith said.

The two said they would commit to continue their devotion as they grew older.

“As long as we can (our devotion to the Nazarene will go on) because we know it is a way of praying and the Lord will listen to us,” Keith said.

For 67-year old Mercedes Polintan, her 44 years of devotion to the Black Nazarene is more than just a tradition.

Polintan said it’s a way of giving thanks for a miracle granted by the Nazarene.

She recalled that her youngest daughter, who is now working overseas, was born with various complications.

“The hospital has been her home,” a teary-eyed Polintan said.

But after someone told her about the miracles of the Black Nazarene, she started to pray to it.

“I prayed to the Nazarene for nine Fridays,” she said.

The Nazarene, Polintan said, healed her daughter from sickness. From then on, she became a devotee and would join the annual feast.

Another devotee, Mateo Cruz, said the Nazarene had been his source of hope despite extreme poverty.

“Because of poverty, we don’t have anyone else to seek help from,” Cruz, 67, said. “If we have problems we go to Him.”

As a laborer earning minimum wage, Cruz said he was able to raise his family despite extreme poverty.

He said he had been joining the annual traslacion or the procession of the Black Nazarene since 1968 to pray for the good health of his wife and children.

One of his sons joins him in the Nazarene procession. 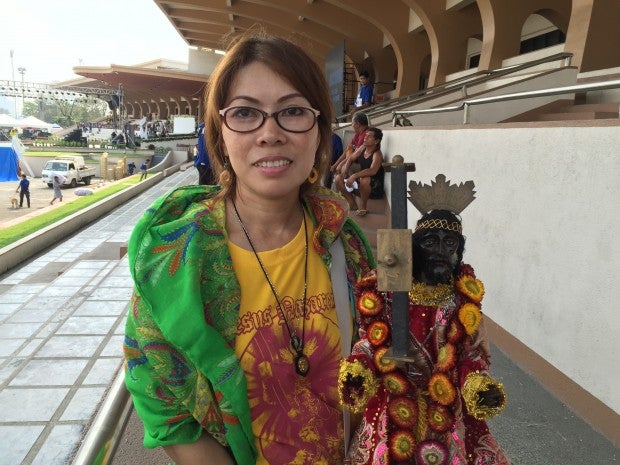 Girlie Gonzaga of Cavite, a Nazarene devotee, says: “If there are problems we just pray to the Nazarene. Then like magic, there will be a solution.”

As long as she can walk

92-year old Praxedes David, sibling of late actress Mitring David, also joined the pahalik. Despite her old age, she vowed to continue her devotion as long as she could walk and touch the Black Nazarene statue.

Another devotee, Girlie Gonzaga, also vowed to continue her devotion to the Black Nazarene.

Gonzaga, 42, was with her family and relatives who came from Cavite, carrying a replica of the statue.

She said she grew up with a family whose devotion to the Black Nazarene was beyond tradition.

When one of her children got ill, her devotion to the Nazarene only grew deeper, she said, until her son fully recovered.

“Life has been kind. Problems are only fleeting, like wind,” Gonzaga said.