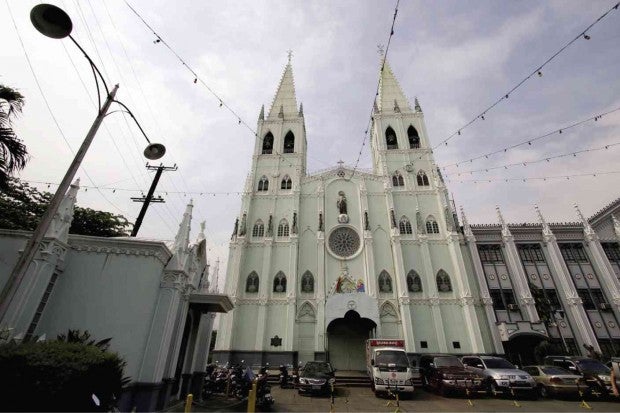 Inspired by the success of Calle Crisostomo in Vigan and Intramuros in Manila, Quiapo’s San Sebastian Basilica is looking to attract more tourists to its community by restoring the church to its near-original state and, eventually, including it in guided walking tours together with nearby historical sites.

Save San Sebastian Basilica Conservation and Development Foundation is spearheading the restoration and drive to promote the church to tourists. Guided public tours of the basilica will start in March, said Tina Paterno, the foundation’s executive director and conservator.

The tour will focus on the history of the church, founded in 1621 and famous for being the only all-metal church in the Philippines, and the restoration process being undertaken.

After earthquakes destroyed three other churches on the site, the Augustinian Recollect Fathers set out to build an earthquake-proof building.

In 1891, they ordered from Belgium a prefabricated church consisting of 50,000 tons of steel and built the present neo-Gothic structure.

It has long been reputed that Gustave Eiffel, the French engineer who built Paris’ Eiffel Tower, was involved in the design and construction of San Sebastian which features two openwork towers, steel vaulting and stained-glass windows.

The basilica is also a popular pilgrimage site, for the statue of the very first image of Our Lady of Mt. Carmel, brought to the country from Mexico in 1617, which survived the earthquakes but not the loss of its ivory head which was stolen in 1975.

During the yearly Black Nazarene procession in January, the traditional Dungaw takes place outside the basilica, when the image of Jesus Christ “greets” the image of His Mother before proceeding to the Quiapo Church.

Visitors will be offered two options. Basic admission, at P120, will take them around the church’s first floor and choir loft. Those with stronger knees may opt for the P150 full tour which will take in the church’s towers and belfry. Students, senior citizens and groups of 51 or more will get discounts.

The idea was pilot-tested at last year’s Visita Iglesia during which visitors were given free 10-minute tours.

“We hired a guy and gave him a picture book, and he walked them through what we’ve been doing [for the restoration]. What surprised us was who turned up. We had [people from] all walks of life: little kids, a welder, a painter, an 80-year-old, men in slippers. And they were interested. They got it, and they wanted to be involved,” Paterno said.

Paterno and her team have just finished the first phase of a 10-year restoration program, which mainly assessed the church’s current condition. In three years, they found more than 300 leaks and pools of water inside many of the basilica’s columns, as well as evidence of corrosion. They are now preparing to design the repairs needed before fully going into construction.

To involve the community in their efforts, Paterno said they have reached out to other historic groups in the Quiapo area like Bahay Nakpil-Bautista and Kapitbahayan sa Kalye Bautista atbp. Lugar Inc. which is working to save Casa Boix (a heritage house), as well as Far Eastern University, noted for a number of historical buildings in the Art Deco style designed by National Artist Pablo Antonio.

These historical sites, plus the San Sebastian Basilica and Quiapo Church, could be included in organized walking tours in the future, Paterno said.

This section of Manila is known as the “university belt,” where several universities and colleges are located in close proximity.

“FEU is an oasis. It’s so clean, green and the buildings are so cool,” Paterno said.

Paterno and San Sebastian parish priest Fr. Antonio C. Zabala Jr. said, however, that a big obstacle to a tourism promotion plans for the basilica is the community itself.

“Basically, the basilica is already a tourist spot. The only hindrance in making it more famous is the locality,” Zabala said.

“It’s isolated, unlike Intramuros, which is like a one-stop shop. That’s why we’re working with the other nearby spots so that hopefully, more people will visit,” he said.

Quiapo’s reputation as a tough neighborhood also poses a challenge, said Paterno, a matter which she and her team have taken up with the local government.

“We’d like to have barangay officials take folks around [as tour guides] so that it will really be locals chaperoning guests. Safety will also be less of a concern,” she said.

For now, however, Paterno said the focus is on repairing the basilica.

“The repairs have to be discreet. We’re not trying to change the building, we’re trying to stop further deterioration,” she said.

The restoration is being funded by grants from the National Commission for Culture and the Arts, United States-based heritage preservation group Bakas Pilipinas and the US Department of State through the Ambassador’s Fund for Cultural Preservation, via the US Embassy in Manila.

And though Quiapo residents are far from rich, many of San Sebastian’s parishioners have been generous in donating whatever they can to help the restoration, Zabala said. “The biggest amount we received was P20,000 from an anonymous donor,” he said.

How to save the country’s only all-steel church?