Poe on Duterte: I pray he won’t be disqualified 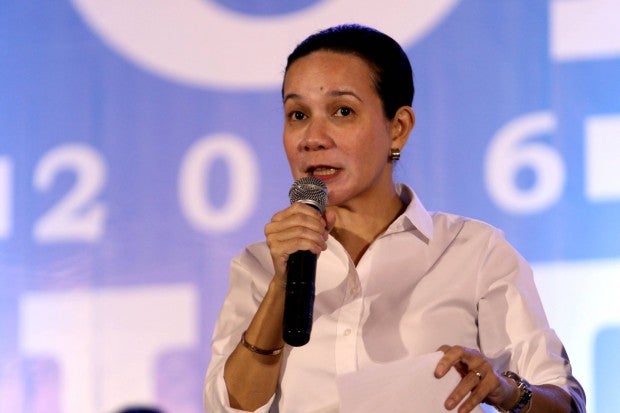 Senator Grace Poe said she hopes and prays that like her, Davao City Mayor Rodrigo Duterte, should also be allowed to run for president in the 2016 elections.

“Ay sana huwag naman, ang dasal ko ay huwag syang ma-disqualify,” Poe said when asked on Monday about the possibility that Duterte might also be disqualified from the presidential race.

(I hope that doesn’t happen, I pray that he won’t be disqualified.)

(My prayer is that he will be given the opportunity to run because that is what we are fighting for. Whether he wins or what, we won’t know that until we put his name on the ballot. That prayer is not only for myself, I also saw my father went through it.)

Poe was referring to her late father, Fernando Poe Jr. (FPJ), who was also slapped with disqualification cases when he ran for president in the 2004 elections. FPJ lost to former President and now Pampanga Representative Gloria Macapagal-Arroyo.

READ: Emotional Poe recalls FPJ’s advice: Don’t give up fighting for others

The senator herself is facing at least four disqualification cases at the Commission on Elections (Comelec) over her residency and citizenship. The first and second divisions of the Comelec have already decided to disqualify her. However, she appealed the case at the Comelec en banc.

This early, Poe expressed readiness in case the Comelec decides to exclude her name in the official list of candidates in the 2016 presidential race.

(With all honesty, I have been telling that my life will be more peaceful should they decide not to include my name.)

Meanwhile, the senator refused to comment on the raging word war between Duterte and another rival, former Interior Secretary Mar Roxas.

(I don’t want to interfere with them.) RAM