Emotional Poe recalls FPJ's advice: Don’t give up fighting for others | Inquirer News

Emotional Poe recalls FPJ’s advice: Don’t give up fighting for others 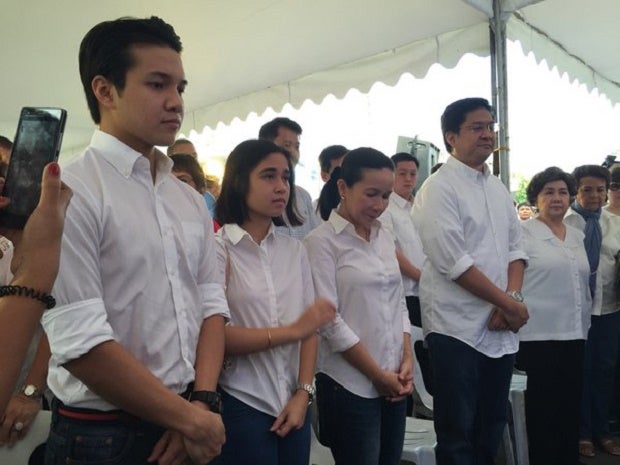 Senator Grace Poe and other family members of the late Fernando Poe Jr. (FPJ) were in full force at the Manila North Cemetery on Monday to commemorate his passing 11 years ago. MAILA AGER/INQUIRER.net

Senator Grace Poe became emotional again when she spoke during the commemoration of the 11th death anniversary of her late father Fernando Poe Jr. (FPJ) held at the Manila North Cemetery on Monday.

In her short speech after the mass, Poe’s voice cracked when she said that her only regret was that she was not able to express gratitude to her father before he died.

(The only thing I regret is I was not able to thank him. That’s why my life now is all thanks to FPJ.)

(I would have wanted to thank my Dad before he died as I said earlier. Of course it would have been a good thing to reiterate my gratitude to him because it if were not for him, I wouldn’t have felt the true love, care and protection of a kind father.)

FPJ died months after he lost to former President and now Pampanga Rep. Gloria Macapagal-Arroyo in the 2004 presidential race.

(He was brave but respectful. When I had difficulties, I always pray this to God: That I may have the courage to do what is right not only for myself but most especially for all of you.)

(And if this is your prayer, it will be easier to accept whatever the destination of our journey may be.)

And now that she is running for president and is facing various disqualification cases over her citizenship, Poe recalled her father’s advice to her not to give up if she is fighting for what is right and not only for her own interest.

Poe said she also learned from her mother, veteran actress Susan Roces, that FPJ’s movie “Isusumbong Kita sa Tatay ko” was based on her life.

(Maybe that’s why I notice myself whispering and squealing to him to help me pray so that I can do the right thing.) RAM