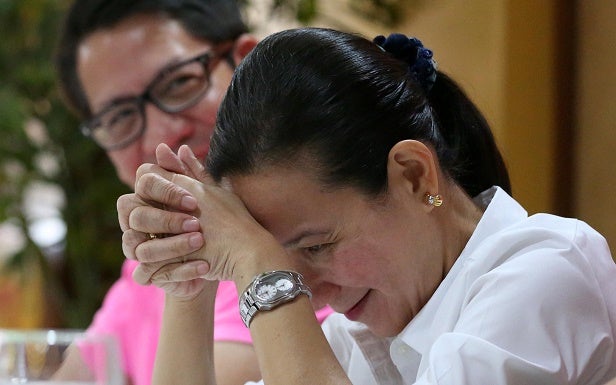 Speaking to reporters, Poe said the decision of the Commission on Elections (Comelec) First Division on Friday to cancel her certificate of candidacy (COC) for President did not surprise her, given a similar finding by the Comelec Second Division on Dec. 1, but she was glad that it was not unanimous.

The First Division said it voted 2-1 to cancel Poe’s COC because she misrepresented herself as a natural-born citizen of the Philippines and she did not meet the 10-year residency requirement for presidential candidates.

“For us, this is like a boxing (match). It will continue as long as you are standing. We know there are still a lot of processes to go through,” Poe said.

“I am not worried about or afraid of them. For me, it is a bigger challenge to run rather than not try at all. Whatever the final outcome of this process, I will accept it completely,” she added.

Poe’s camp said it would appeal the ruling in the full Comelec and the Supreme Court.

“In the meantime, I assure you that I am still a candidate for President. Let us fight for genuine democratic elections, where the people’s welfare takes front and center,” Poe said in a statement she issued later.

Poe maintained that she is a “true Filipino from birth.”

“I was raised as a Filipino, lived, studied, got married in the Philippines, and wish to serve fellow Filipinos as a Filipino. That my very identity is being taken away from me is hurtful,” she said.

Poe said all she wanted was a “fair consideration of the facts,” and that she had submitted evidence of her citizenship and residence.

“It is sad that the Comelec First Division has chosen to ignore the facts to deny me the chance to better serve our countrymen, and also to deny our people their choices in an open election,” she said.

In her talk with reporters, Poe said there was a need to remember what an election meant.

“In an election, the people must have the power to choose the leader they want,” she said, stressing this right should prevail.

She said she would continue working to bring her message to the people and her plan to help them improve their lives.

“If I would not be given the chance to do this, I will still be at peace with myself because I have reached this point and have been able to serve our people,” she said.

Poe said the issue in the Comelec was not just about her presidential candidacy because how the cases would be resolved would affect “the lives, status and limited opportunities accorded to all other foundlings, putting them at a disadvantage for reasons and circumstances that are not their doing.”

Former and current overseas Filipino workers who might want to go into public service to give back to the country would also be affected, she said.

“Thus, that institutions are being used to exclude fellow Filipinos is a cause for serious concern. Our laws should protect and defend their welfare, not shut them out,” she said.

Poe learned about the Comelec First Division’s ruling before she got up to speak to a gathering of barangay officials in Tarlac, home province of President Aquino.

But Governor Yap said the NPC had yet to decide who to support in the 2016 presidential election and that his presence at the meeting should not be taken to mean he was for the Poe-Escudero ticket.

The party’s choice is expected to be announced in January, he said.

The Comelec decision did not appear to dampen Poe’s mood.

Addressing the barangay officials, she spoke about her plans for the development of Tarlac, including the construction of a multipurpose dam and more farm-to-market roads. She also mentioned her programs to fight official corruption and provide free lunch to schoolchildren.

In her talk with reporters, Poe was asked how the Comelec Second Division’s decision to cancel her COC had affected her donors. She replied that they were worried and asked what would happen next, but they continued to urge her to fight on and promised to continue supporting her.

She said she was grateful to her supporters. “They believe that the country needs a leader who is honest, trustworthy and who has a sincere desire to improve the country,” she said.

“That has not changed. If ever, that is still me, I am still probably the one they trust. You can see that they are worried, but they continue to believe that this is something to fight for,” she said. With a report from Jo Martinez Clemente, Inquirer Central Luzon

Poe on DQ: It hurts to have my identity taken away from me