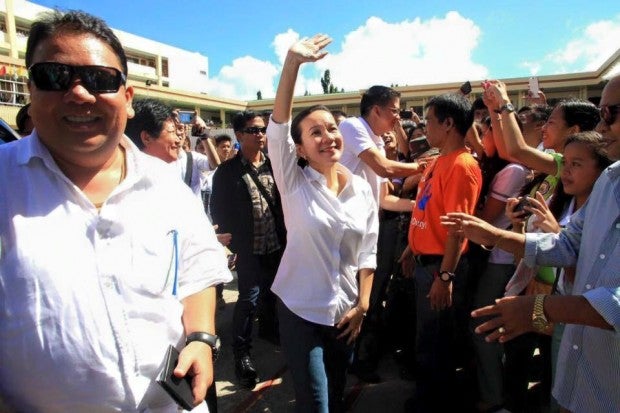 Sen. Grace Poe suffered a second setback in the Commission on Elections (Comelec) on Friday after the poll watchdog’s First Division decided to disqualify her from next year’s race for Malacañang.

The Comelec First Division voted 2-1 to cancel Poe’ certificate of candidacy (COC) for President, after finding that she “committed material misrepresentation” when she claimed to be a natural-born citizen and has resided in the Philippines for at least 10 years.

On Dec. 1, the Comelec Second Division voted 3-0 to disqualify Poe from the presidential race for allegedly failing to meet the residency and citizenship requirements.

Poe’s camp has filed a motion for reconsideration in the full Comelec seeking to overturn the Second Division’s ruling.

While Tatad and Valdez insisted that Poe is not a natural-born Filipino, Contreras cited the senator’s failure to meet the 10-year residency requirement to run for President.

In its 49-page decision, the First Division, citing relevant laws, including the 1987 and 1935 Constitutions, said Poe “though a Filipino citizen, was not and could not have been a natural-born Filipino because she was adopted as a foundling with unknown biological parents.”

“To emphasize, the letter of the 1935 and 1987 Constitutions are clear and unambiguous; jurisprudence likewise are unmistakable and definite. A simple reading thereof yields what is already obvious and apparent conclusion under the law—that [Poe] is not a natural-born Filipino citizen,” the panel said.

“In complete disregard of what is clear under the law, the Constitution and jurisprudence, [Poe] declared in her COC for President that she is a natural-born Filipino citizen who is fully qualified to run and serve as President of the Philippines. The clarity of the law notwithstanding, [Poe] chose to ignore and brush aside the Constitution and jurisprudence and misrepresent herself as a natural-born Filipino citizen, clearly in order to serve her purpose and suit her intent of running for the presidency,” it said.

As to the issue of residency, the First Division said it found that there was a deliberate attempt on the part of Poe to misrepresent her period of residency in the Philippines.

It said Poe committed material misrepresentation when she declared she would be a resident of the Philippines for 10 years and 11 months by the May 9, 2016, general elections.

Based on that declaration, the First Division said, Poe failed to meet the residency requirement.

In her verified answer, Poe explained that her declaration in her COC for senator was due to an “honest mistake” because she had erroneously computed her period of residence up to the day she filed her COC instead of on Election Day.

But the First Division was not convinced.

“It is indeed incredible to think that [Poe], a well-educated woman and already then a public servant with full staff support, including a legal team, would not know how to correctly declare the facts material to her candidacy for the May 13, 2013, elections,” it said.

It added that the form she filled out “is very clear that what was required to be stated therein is the period of residency up to the day of the elections” in 2013.

The First Division also pointed out that computed from Oct. 2, 2012, the date Poe provided in her COC for senator is “more or less around” April 2006, which “still does not match [her] claim that she has been a resident of the Philippines since May 24, 2005.”

“This stark variance in [Poe’s] declaration of her residence and her inconsistent statements in connection therewith are clear indications of her intent and attempt to deliberately misrepresent a material matter in her COC for President for the purpose of hiding her ineligibility and mislead the electorate. This glaring disparity proves that [Poe] intended and attempted to conceal the material fact that she is ineligible to run for President for failure to meet the 10-year residency requirement,” it said.

Lim, in his 81-page dissenting opinion, said he believed Poe did not commit material misrepresentation on both issues.

He said Poe was able to effectively show proof of her intent to permanently reside in the Philippines as early as May 24, 2005, and that the division does not have the mandate to rule on whether she is a natural-born citizen.

“On the issue of residency, both the Contreras and Valdez petitions failed to take into account that as early as May 24, 2005, [Poe] was able to show actual, physical and personal presence in the country, coupled with the intention of permanently residing herein. There is hence no material misrepresentation in the COC of [Poe] as to the number of years she has been a resident of the Philippines,” Lim said.

As for the decision on Tatad’s petition, Lim said it should have been dismissed immediately since Tatad specifically filed for the disqualification of Poe instead of the cancellation of her COC.

“The Tatad petition cannot be treated as one to deny due course to, or cancel the COC of [Poe] since the basis of the action is not whether [Poe] committed material misrepresentation, therein, but that she lacks the citizenship and residency qualifications required by law to become President. The Tatad petition should have been dismissed outright for availing [itself] of the wrong mode to assail the qualifications of [Poe],” Lim said.

But Manuel Luna, Tatad’s lawyer, said the ruling was a “victory for the Filipino people.”

“As expected, the Comelec upheld our position—which is clearly reflective of the correct reading and application of the Constitution, the laws, procedures and jurisprudence—that [Poe] is not a natural-born Filipino and had not met the period of residence qualification. This is a victory for the Filipino people. I think it’s about time she consider[ed] backing out from the presidential race,” Luna said.

Sought for comment, Contreras said that while he wanted to relish the feeling of victory in this round, he said he knew this was not the end, as he expected Poe to bring a motion for reconsideration to the full election commission.

“Although I’m hopeful that the [full commission] will sustain the ruling of both divisions, these will all certainly reach the Supreme Court. Right now I just want to relish the feeling of victory in this round. I stand firm with the belief that my petition stands on solid legal ground, supported by jurisprudence,” Contreras said.

“I am happy that even if I’m not a lawyer, I have impressed upon the majority of the commissioners in the First Division that no one is above the law. Not even if you are a Grace Poe,” he said.

Supporters of Poe gathered in front of the Comelec main office in Manila to protest the First Division’s ruling.

Sereno: Wisdom, not politics, will guide SC in poll cases