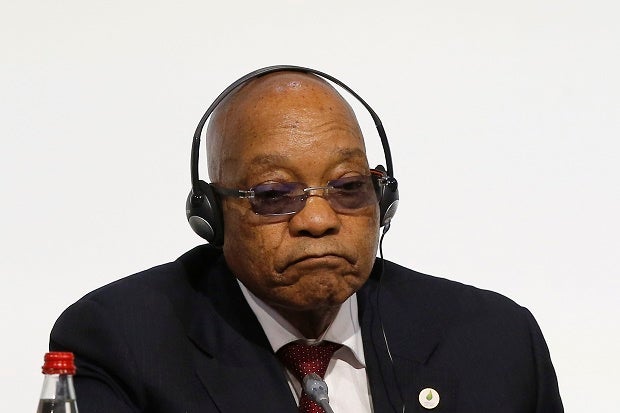 The dismissal of little known ruling party legislator David van Rooyen was Zuma’s second firing following his sudden sacking of respected finance minister Nhlanhla Nene on Wednesday, which touched off a storm of criticism and collapsed the rand currency.

“I have received many representations to reconsider my decision. As a democratic government, we emphasise the importance of listening to the people and to respond to their views,” Zuma said in a statement.

The South African leader has now turned to Pravin Gordhan, who held the post of finance chief for five years until 2014.

The firing of Nene and the appointment of Van Rooyen saw the rand currency drop to historic lows against the US dollar.

The move was also roundly condemned by analysts and media commentators, who warned it would destabilise an economy already struggling with high unemployment and slowing growth.

Nene’s removal came less than a week after South African debt was moved closer to “junk” status by rating companies, which highlighted growth predicted at a sluggish 1.4 percent this year, and rising interest and inflation rates.

Zuma was accused of sacking Nene because the minister had not rubber-stamped planned spending on a huge nuclear power programme and publicly slapped down a move by state-owned South African Airways (SAA) to renegotiate a plane-leasing deal with Airbus.

Apparently shaken by the response, Zuma on Saturday took the unusual step of denying that he had a romantic relationship with SAA board chairwoman, Dudu Myeni, who had pressed hard for a new deal with Airbus.

The president, who has four wives, issued an official statement rebutting rumours that he and Myeni were having an affair and had a child together.

Just 24 hours later he reversed his appointment of Van Rooyen and reinstated Gordhan, who was widely respected during his tenure as finance minister.

Van Rooyen will now take over Gordhan’s post as minister of cooperative governance and traditional affairs.

‘Russian roulette with our economy’

Reaction by opposition parties was swift, suggesting that Zuma had lost control and should be recalled as president by the ruling African National Congress.

“How much longer can South Africa afford Zuma to hold office? We need change and a new plan for South Africa.”

“The EFF calls for the immediate resignation of Zuma before he plunges the country into a deeper crisis,” the party said in a statement.

Bantu Holomisa, leader of the United Democratic Movement, said the president had “lost control” and the ANC “should recall Zuma immediately.”

With Zuma’s announcement made late at night, local analysts were still absorbing the stunning flip-flop and its likely effect on the markets.