‘Comelec has no say on Poe DQ’ 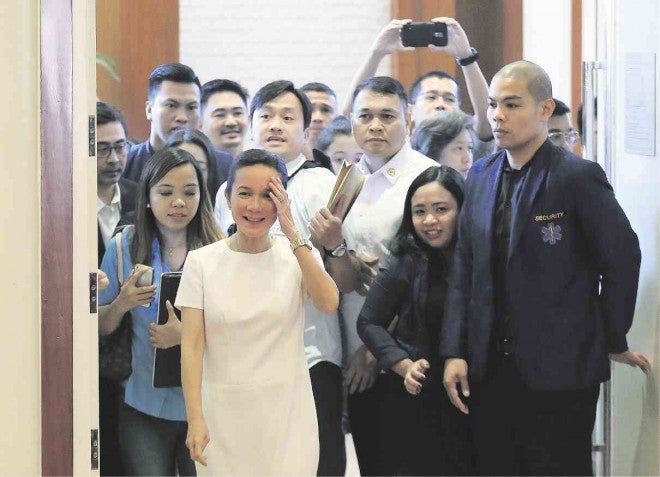 GOODNESS GRACIOUS Sen. Grace Poe with a bevy of supporters at her press conference in Pasay City on Wednesday where she blames two of her closest rivals as those behind her disqualification by the Commission on Elections’ Second Division from the presidential race. A veteran election lawyer says she is in for a bruising battle to overturn the decision of the Comelec’s Second Division. RAFFY LERMA

The Commission on Elections (Comelec) has no authority to determine whether Sen. Grace Poe is qualified to run for President, former Comelec Chair Sixto Brillantes Jr. said on Wednesday.

In a telephone interview with the Inquirer, Brillantes, a veteran election lawyer, said the Comelec can only establish whether Poe’s disclosures in her certificate of candidacy (COC) were false or deceptive.

“The sole judge of the qualification of a President is the Presidential Electoral Tribunal (PET),” Brillantes said.

The questions of citizenship and residency against Poe should be settled only by the PET, not by the Supreme Court, and this could happen only after the election if the senator wins, Brillantes said.

The PET was created by law in 1985 with a mandate to try, hear and decide protests relating to election, returns and qualifications of the President and Vice President of the Philippines.

The Comelec’s Second Division voted 3-0 on Tuesday to cancel Poe’s COC, granting the petition for disqualification brought by former Government Service Insurance System lawyer Estrella Elamparo who claimed the senator did not meet the 10-year residency requirement for presidential candidates.

On Wednesday, Elamparo followed up, bringing a motion for Poe’s exclusion from the ballot for next year’s general elections.

Poe faces three other petitions for disqualification, questioning her citizenship and residency, in the Comelec First Division.

Another veteran election lawyer, Romulo Macalintal, said Poe was in for a bruising battle to overturn the decision of the Comelec’s Second Division.

According to Macalintal, Poe should be able to present new and material evidence to prove that she is a natural-born Filipino and that she has complied with the 10-year residency requirement in contesting the decision before the full election commission.

Should the full commission uphold the Second Division’s ruling, Poe should go to the Supreme Court and “strongly argue” there that the Comelec “gravely abused” its discretion in barring her from the presidential election, Macalintal said.

He said that while a DNA test proving her Filipino bloodline could put an end to questions about her citizenship, settling the question of her residency in her favor would be difficult because she herself declared in her COC for senator that she was a resident of the Philippines for only six years and six months in 2013.

“It will be an uphill battle for Sen. Grace Poe at the Comelec level,” he said, noting that the 3-0 decision of the Second Division would be hard to reverse on the seven-member commission.

A similar finding and resolution by the Comelec’s First Division, which is handling three other disqualification cases against Poe, will foreshadow the final decision of the full commission, he said.

“All that is needed by the petitioner is one vote from the members of the First Division, since she already has three from the Second Division, while Poe needs the vote of four members,” Macalintal said.

SC ‘not trier of facts’

If the full commission sustains her disqualification, she would also have a hard time in the Supreme Court because the highest court was “not a trier of facts,” he said.

“In most cases, the court does not disturb findings of facts of the agency that tried and heard the case … Poe has to strongly argue that the Comelec gravely abused its discretion in coming up with such decisions,” he added.

Poe’s troubles will become more complicated if the full commission also decides to exclude her from the ballot, Macalintal said before Elamparo filed her motion for exclusion.

Brillantes also raised the possibility of more difficulties for Poe if she is dropped from the ballot.

“If the [full commission] decides that Poe cannot run for President and cancels her COC, her name may not be included in the ballot. She will really be affected by that,” said the former Comelec chief.

He added, however, that the Comelec could not remove Poe from the ballot “until a final decision has been reached by the Supreme Court.”

But the questions of Poe’s residency and citizenship should be settled only by the PET, not by the Supreme Court, and this would happen only after the election if the senator wins, Brillantes said.

In the meantime, Poe can try to overturn the ruling of the Comelec’s Second Division and if she fails, she can seek relief from the Supreme Court, he said.

But to ensure that the case will be decided fairly, the three Supreme Court justices on the Senate Electoral Tribunal who voted against Poe—Associate Justices Teresita Leonardo-de Castro, Arturo Brion and Antonio Carpio—should inhibit themselves, he said.

Former Justice Secretary Leila de Lima, a senatorial candidate on the Liberal Party (LP) ticket headed by administration presidential candidate Mar Roxas, said all questions about Poe’s candidacy should be settled before the printing of the 2016 ballots.

De Lima said the cases against Poe should be elevated immediately to the Supreme Court after the resolution of motions for reconsideration because of the “shortness of the period” the Comelec had to print the ballots.

“These questions on Poe’s citizenship and residency must be settled with finality before the printing of the ballots, because if the name Grace Poe is voted for and wins, only to be disqualified later by the Supreme Court, instability will ensue,” said De Lima, also a former election lawyer.

“There will be uncertainty because there is a question on [which] will take precedence in the assumption to the presidency, the principle that the second placer can never be the winner, or the tenuously pronounced new doctrine espoused by the Supreme Court reversing this doctrine, thereby allowing any second placer to claim the mandate of the people,” she said.

Poe’s running mate, Sen. Francis Escudero, said he was disappointed with the Comelec Second Division’s decision to disqualify Poe from the presidential race.

But Escudero said it was only a “temporary setback,” as he expected Poe to win relief from the full election commission or the Supreme Court.

“We still have faith in our justice system. We believe that in the end, Senator Grace will be allowed to run based not only on international and domestic laws but also on the factual situation of the case,” Escudero said in a statement.

“Sen. Grace Poe is a Filipino and everybody knows it except those whose political interests would be affected by her candidacy,” Trillanes said in a statement.

Escudero expressed disappointment at the Comelec Second Division’s completely ignoring a 1995 Supreme Court decision that he said was applicable to Poe’s case when it said she made material misrepresentation in her residency status.

The Second Division said Poe failed to meet the 10-year residency requirement for presidential candidates, citing her declaration in the COC she filed when she ran for senator in 2013 that she had been a resident of the Philippines since November 2006.

This was short of six months of the required May 2006 commencement of residence in the country to qualify as candidate for president in the May 2016 elections.

“I am amazed with the resolution. The Comelec Second Division has no basis in saying that the 2013 COC [is] correct and the 2016 COC [is] not correct. I have been reading the Comelec resolution many times over [but I cannot] see any justification for that kind of conclusion,” Escudero said.

He said the Second Division deliberately disregarded the doctrine of animus revertendi, or having the “intention to return,” which was cited by the Supreme Court in allowing former first lady Imelda Marcos to run as representative of Leyte in Congress in 1995.

The Supreme Court ruled then that an individual does not lose his or her domicile even if he or she has lived and maintained several residences in different places.

“The high tribunal also held that Mrs. Marcos made an honest mistake in writing “seven months residence” in her COC for a congressional seat, a period less than the constitutional requirement of “not less than one year” for that position,” Escudero said.

Trillanes contended that the Comelec’s Second Division should have considered “the intention to reside permanently in the country,” which was “best manifested by the fact that Senator Poe’s children were enrolled in Philippine high schools back in June 2005.”

“To base it on the date of her application for dual citizenship is erroneous. To cite an example, a foreigner who wishes to be a citizen of the Philippines would need to satisfy a residency requirement [that] is based on the time that he resided permanently in the Philippines even though during this time he is still not yet a Filipino citizen,” Trillanes said. With reports from Tina G. Santos, Tarra Quismundo and Christine O. Avendaño