Palace on Duterte’s womanizing ways: Let people be the judge 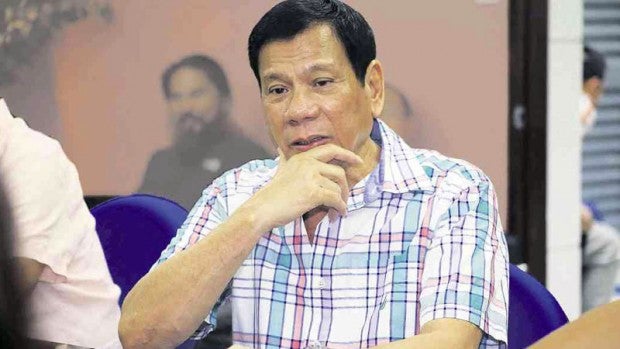 Malacañang on Tuesday refused to directly comment on Davao City Mayor Rodrigo Duterte’s admission that he was a womanizer.

“The people will be the ultimate judge of each and every candidate from the national to the local elections,” Presidential Spokesperson Edwin Lacierda said in a text message to the media.

“Let the people decide on who they want to be their leaders. You know, it’s up to the people,” he later said during a media interview.

Lacierda was asked for Malacañang’s statement on Duterte’s revelation that he had two wives and two girlfriends.

It was during a speech in Taguig City last Sunday that the presidential aspirant admitted his relationship with four women.

“They are telling me that they heard I am a womanizer. That is true. That is very true,” he said then, in his attempt to be candid to the voters.

During the event, he had photos taken with various women sitting on his lap.

He said his first wife was sick while his second wife worked as a nurse in the United States.

On Monday, Lacierda reacted to Duterte’s comment that he “cursed” Pope Francis after being inconvenienced during the papal visit in January.

Duterte is among the five most popular presidential aspirants for the May 2016 elections.

The outspoken mayor initially hedged and refused to run for the presidency. However, Duterte eventually made his bid official last week after Martin Diño, his Partido Demokratiko Pilipino Lakas ng Bayan (PDP-Laban) partymate, withdrew his candidacy.

There were earlier rumors that Duterte would take the substitution route after filing his certificate of candidacy for reelection.

READ: Comelec: Duterte allowed to withdraw COC for reelection, file another for presidency

Duterte has become a national icon because of his strong stance against criminals. He has been linked to the notorious vigilante group Davao Death Squad. RAM