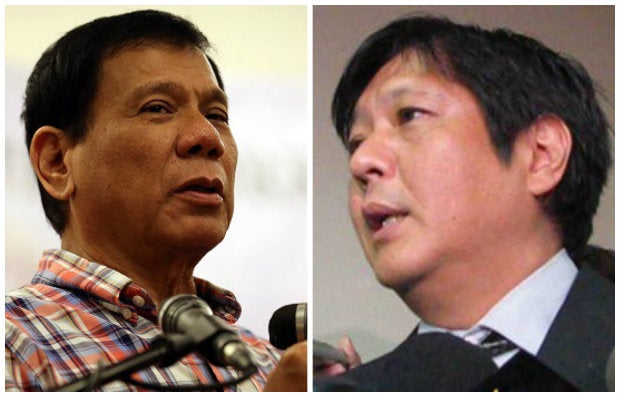 Marcos was reacting to a statement of Sen. Aquilino “Koko” Pimentel that Partido Demokratiko Pilipino-Lakas ng Bayan (PDP-Laban) is considering him to be Duterte’s running mate in next year’s polls, despite a reported tandem with Sen. Alan Peter Cayetano.

READ: IT’S OFFICIAL: Duterte, Cayetano team up for 2016 | Duterte: My candidacy for the presidency is now on the table

Marcos said he was in constant communication with Duterte, who recently declared his intention to seek the presidency despite previous denials in various occasions.

“We’re always talking. We talk about every subject under the sun. We don’t know. First of all, we still have to know some kind of finality what the Mayor’s plans really are because minsan nagsasabi siya, tatakbo siya minsan hindi (sometimes he says he’s running, sometimes he says he isn’t). So I will be talking to him again and ask him what his plans are. I really can’t,” Marcos said in an ambush interview during the general membership meeting of the Anvil Business Club.

“We have, as you know, been trying to form a loose coalition with Senator Miriam. So, yes. We’re in flocks. We are discussing. If somebody supports me, why will I turn that down? Of course not. I will always welcome anyone’s support,” he said.

Asked about his tandem with Santiago, Marcos said “everything is possible” in Philippine politics.

“This election has turned out to be unique and there are many, shall we say, arrangements that are not traditional. So, we will have to find and make our own way with Senator Miriam to define exactly what our coalition will be… As I said, we are still trying to define the coalition that we are forming,” Marcos said.

“I would like to have the support of everybody, not only the Mayor, but again, and I would welcome that support. Again, these things are all pretty much open still,” he added. IDL