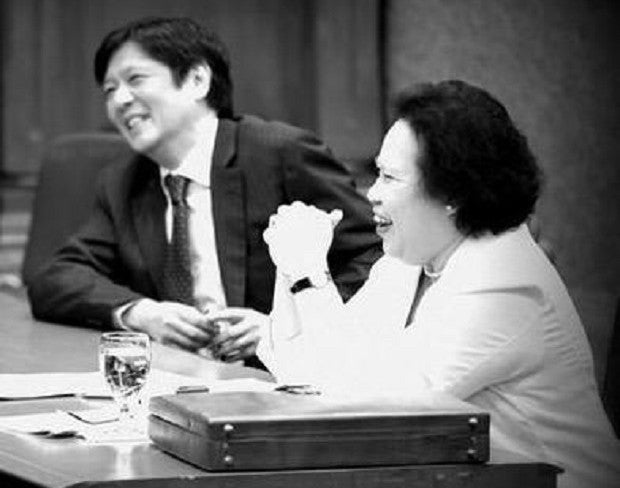 ARE THEY or aren’t they? We will know today (Friday).

Sen. Miriam Defensor-Santiago, who says she is running for President in next year’s general elections, confirmed Thursday that she had chosen Sen. Ferdinand “Bongbong” Marcos Jr. as her running mate.

“We mutually chose each other,” she told reporters.

Asked for clarification, Santiago said her partnership with the son of the late dictator Ferdinand Marcos was “coincidental.”

“Our telephone lines happened to cross each other,” Santiago, a former Regional Trial Court judge, said after receiving the Hall of Fame award from the Philippine Judges Association.

Santiago, 70, said she would file her certificate of candidacy today at the Commission on Elections headquarters in Intramuros, Manila. She is running as a candidate of her People’s Reform Party.

Asked if Marcos would accompany her, she replied: “I don’t know if he will be there. He will probably be there.”

But hours after Santiago’s announcement, Marcos issued a statement indicating the partnership was not yet final.

He said he had lunch with Santiago’s husband, Narciso, on Wednesday. “We discussed a wide range of subjects concerning the upcoming elections and [talked about] possible alliances,” he said.

He said he and Narciso  would “meet again soon.”

But a source close to Senator Santiago said the partnership was sealed during Marcos’ meeting with Santiago’s husband over dinner, not lunch, at

The source, who spoke on condition of anonymity, said talk of the partnership had been kicked around for weeks, with “mutual friends” facilitating backroom talks between Marcos and Santiago.

With Marcos not willing to be in the same hole as his colleagues in the Nacionalista Party, Senators Antonio Trillanes IV and Alan Peter Cayetano, both of whom are running for Vice President without running mates, the source said Marcos sought out Santiago for talks about a partnership.

It was not the first time that Marcos, who had already filed his candidacy for Vice President, had been in talks with a presidential candidate.

Marcos, 58, said he had been invited to become the running mate of Vice President Jejomar Binay, the presidential candidate of the opposition United Nationalist Alliance. But their talks fizzled out, he said.

“It was difficult for me to tame our political differences,” he said, referring to Binay, a former human rights lawyer who fought the martial law regime of the senator’s father.

Binay is accused of pocketing millions of pesos in kickbacks from irregular infrastructure deals struck when he was mayor of Makati City. On Monday, the Ombudsman announced that probable cause had been found to put Binay, his son, dismissed Makati Mayor Junjun Binay, and 22 other city officials on trial for the charges.

A partnership with Binay “must be rooted in a shared vision for our country, a common platform of government as well as political perspectives,” Marcos said.

Santiago announced her plan to run for President on Tuesday, saying she had beaten stage 4 lung cancer.

Asked Thursday if she would disclose her medical history to the public, she said: “They can have the truth completely. I will be perfectly willing to answer any question.”

Malacañang was asked Thursday after Santiago’s statement if it thought it was important for presidential aspirants to disclose their health records.

Communication Secretary Herminio Coloma Jr. replied that commenting on the health of those who want to replace President Aquino in Malacañang was best left to the voters.

“With regard to concerns over the health of the other candidates, we prefer that the Filipino people themselves make the assessment,” Coloma said.

President Aquino’s health has come under question several times, especially when he missed a meeting with International Monetary Fund Managing Director Christine Lagarde in November 2012 because of a severe cough and cold.

The two met on the sidelines of the World Economic Forum in Davos, Switzerland, in January.

A heavy smoker, Mr. Aquino was also reported to have collapsed last summer, but the report was not proven.

The Palace vehemently denied the report.

When the President was again reported to have a cold, the Palace blamed it on his pollen allergy.

On Thursday Coloma said Mr. Aquino had kept himself “healthy and fit” in the five years and a half that he had been in office.

Santiago, who missed serving on the International Criminal Court and took a long leave of absence from the Senate because of poor health, said on Tuesday that her doctor had given her a clean bill of health and she was ready to seek again the presidency.

The source said Santiago was physically fit to run for President, as she had “contained” her illness.

This will be her third run for Malacañang. She first ran for President in 1992, with former Sen. Ramon Magsaysay Jr. as her running mate, but lost to Fidel V. Ramos.

She ran again in 1998, with former Sen. Francisco Tatad as her partner, but lost to Joseph Estrada.

Santiago will end her second straight term in the Senate in July 2016.

The source said Santiago was not making a token run for the presidency.

Santiago, the source said, would form a full senatorial team to back her run with Marcos.

Tolentino quit the MMDA in disgrace last week and asked the LP to take him out of its senatorial slate after a barnyard show featuring the sexy dance group Playgirls at an LP event in Laguna province on Oct. 1 backfired on him.