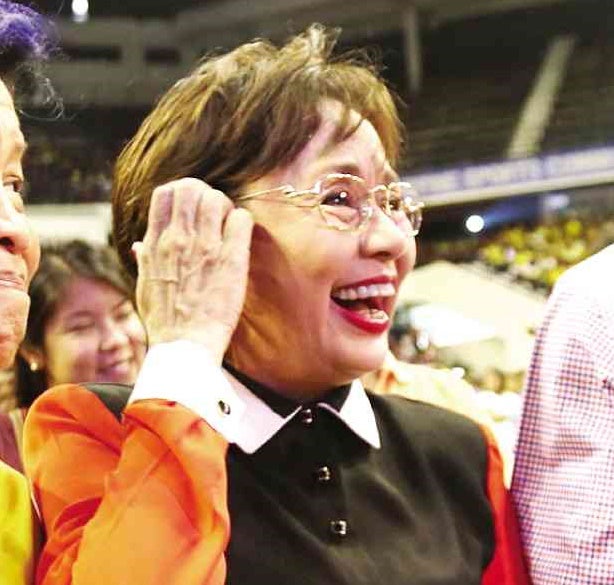 Santos, who had been wooed by the ruling Liberal Party (LP) as a candidate for vice president, filed her certificate of candidacy (COC) as representative of the new district.

Her son, actor Luis Manzano, had been rumored to be running for governor but the rumors remained to be just rumors.

In the province of Quezon, Lorenzo “Erin” Tañada III, filed his COC for congressman of the fourth district on Wednesday.

Rosal and his entourage first attended Mass before going around the city in a motorcade and filing his COC. His supporters wore yellow shirts.

In Masbate province, infamous for its history of election-related violence, candidates started filing COCs only on the second day of the process on Tuesday.

On Tuesday, Masbate City Mayor Rowena Tuason, of LP, was among the first to file a COC.

On Wednesday, Rizalina Seachon Lanete, suspended governor now detained for a plunder case involving pork barrel when she was a member of the House, filed a COC for governor through her executive assistant. She is running under the Nationalist People’s Coalition (NPC).

Her son, Scott Lanete, filed his COC to seek reelection as representative of Masbate’s third district.

Still in Masbate, at least three members of the Bravo clan filed COCs for provincial and congressional posts—Narciso for governor, his wife Marvi for reelection as first district representative and Kaye Revil for vice governor.

In Camarines Sur, LP candidate for vice president Leni Robredo accompanied the filing of COC of John Bongat, who is running for reelection as mayor of Naga City.

Gabby Bordado, incumbent Naga councilor, is running for the House seat that Robredo would vacate. Bordado is running against Luis Villafuerte of NPC, former governor and representative. The Villafuertes’ dominance in the third district was ended by Robredo, who beat Villafuerte’s wife, Nelly, in the 2013 elections.

In Laguna, neophyte candidate Ma. Elsa Rivera, of Calamba City, filed her COC for representative of the second congressional district, challenging Rep. Joaquin Chipeco Jr. who filed his COC for reelection on Monday.

In Sorsogon, gubernatorial candidates Robert Lee Rodrigueza (LP) and Eric Reyes Dioneda (PDP-Laban) vowed not to resort to violence during the campaign.

In the fourth district of Pampanga, the 27-year reign of a political clan has met what observers said was its most serious challenge so far.

Bondoc filed his COC on Monday for a second term. Rimpy’s mother is a member of the Puyat clan.

As of Thursday, former President Gloria Macapagal-Arroyo had no rival in her bid for a third and last term as representative of the second district.

Reelectionist Gov. Hermogenes Ebdane Jr. filed his COC at the Comelec office in Iba town on Thursday. He was with his wife, Alma, and supporters.

The governor is seeking a third term and faces challenge from former Gov. Amor Deloso. Ebdane’s son, Jun Omar, filed a COC for representative of the second district.

In Olongapo City, former Mayor James “Bong” Gordon Jr. filed his COC for mayor on Thursday in a bid to revive the family’s presence in local politics.

Gordon is running under the political party Bagumbayan. He served as mayor from 2004 to 2013. In 2013, he ran as representative of Zambales’ first district but lost to Jeffrey Khonghun.

In Bulacan, Gov. Wilhelmino Sy-Alvarado and Vice Gov. Daniel Fernando, both reelectionists, filed their COC on Thursday. Alvarado, who chairs the Regional Development Council in Central Luzon, and Fernando are running under the Liberal Party.

In Pangasinan, Rep. Gina de Venecia filed on Thursday filed her COC for her reelection bid in the province’s fourth district. “I chose this date because it’s the 100th birthday of my father, Dr. Jose Perez. So, it’s my lucky day,” said De Venecia, who is running under the LP.

As of Thursday, only reelectionist Rep. Marlyn Primicias-Agabas (sixth district) had not filed her COC among the province’s six representatives.